Something prevents my os to boot (arbitrarily)

When I boot the machine, I get a black screen with 2 lines of code which looks something like this:

Then nothing happens.
After that I open the command line with the shortcut, do something (something like sudo reboot, or in other case some pacman query) and then it boots normally until I shut down or reboot again. What’s the best way to understand why that happens?

PS I have not updated any program after the first update when I freshly install EOS the day before yesterday. I have only installed some basic programs that I had with my previous EOS. nvidia-smi command seems fine too. Any ideas?

Please read through the page linked to

and provide some more detailed info, valuable for anyone who is able to assist you.

Thanks and best of luck!

Here is the boot log of the current session which happened to boot normally: https://clbin.com/bPWtP

I thought it’s the time shift, but even after deleting time shift and removing the ssd it still doesn’t boot https://clbin.com/BGAMB

There are some recent threads on the forum, plus 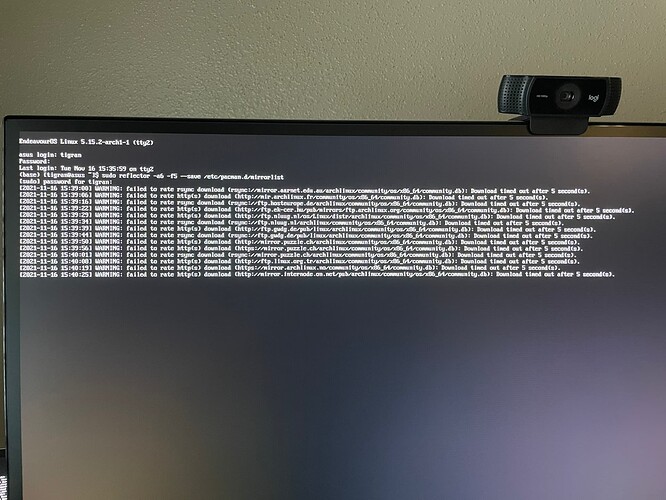 The first command gives these results

Those are warnings. What’s not working?

Should I wait until all the links fail or is it eventually going to be able to find links that work?

I can’t see what your computer is doing, so you’ll have to work out whether your network is working or not.

The network works when I do ping

What happens when you do pacman -Syyu

Edit: Have you had EndeavourOS installed and working on this laptop?

pacman -Syyu does its job without errors. And yes, I have used EOS for around a week without issues before.

I’d install the linux-lts kernel (and headers) and see if that works better. There may be some issues with this early version of the 5.15 kernel.

Do I have to remove anything before install, or is it plain install and reboot?

I remember that dkms installed nvidia 475 and after I updated the packages, I got 495 and that’s where the problem probably appeared. What do you think?

nvidia-installer-dkms -n will put you back to nouveau open source drivers after reboot.

ricklinux Would you recommend to try that? Will that erase the current nvidia drivers completely?

Yes it will and install open source nouveau. I’m not sure how you installed it originally? I know this laptop is kinda special and others have had troubles. I’m surprised you had it working.