I have installed the LTS Linux kernel so I now have four login options: the ‘regular’ Linux kernel as well as its ‘fallback’ plus the LTS and its fallback.

My very small suggestion is this: During login we see Linux linux or Linux lts.Would it be possible to show the version number of the kernel(s) on the login page? (And yes I know how to use the uname command.)

I would find showing the version numbers during login to be preferable to what is shown currently - BUT — if that change would require an inordinate amount of time and/or effort on the part of the developers, well then just forget about it!

Thanks for any consideration (and comments).

In grub I believe it is not easy to do (online), since the grub shell is quite limited. At grub generation time it in principal could be done, but then we’d have to modify grub itself.
But I can check if I find a reasonable way to do it.

Thank you for responding to me. As I mentioned, if it would require an excessive amount of time and/or effort, don’t bother; it is really not worth it.

I had just thought that it would be helpful to have the version number shown instead of Linux linux. Linux 5.x.x (and Linux Lts 4.x.x) would be more informative.

But you already have a plateful - so just ignore this request.

I looked at it, and it really is not easy to give that info.
In fact, I did think of the same thing a while back, and then I didn’t have an easy way to do it either.
As you mentioned, uname will do the job after boot…

And then I’d have to reboot again so as to use the latest kernel version.

It would have been nice if there had been some EASY way to actually show the available kernel version numbers on the login screen but that idea appears to be dead in the water.

Of course, it’s not a really important thing and I can live without it. I certainly do not want to cause any grief to the developers who have done such a great job with EndeavourOS.

It should show you all your installed kernels

edit; I use autocomplete in zsh so this is mine. As you can see I see both my installed kernels 5.2.8 arch and 5.2.8-zen

It should show you all your installed kernels

edit; I use autocomplete in zsh so this is mine. As you can see I see both my installed kernels 5.2.8 arch and 5.2.8-zen

I tried your exact command on an Antergos computer but it didn’t work. 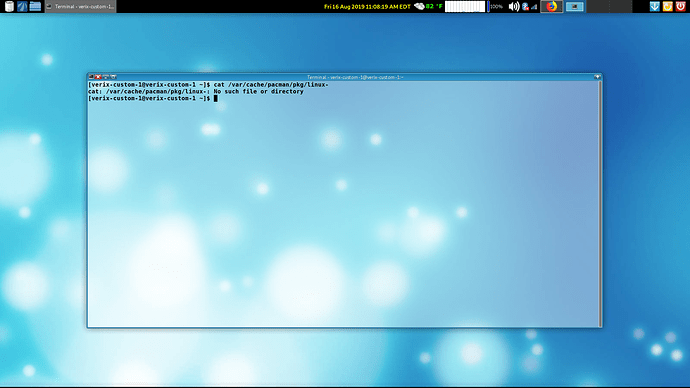 Later today I’ll try it on one of my EndeavourOS computers and I’ll let you know if it works there. Please note that I do NOT use autocomplete in zhs. What would be the cat command for me?

THANK YOU for this information.

(nitpicking) still shorter would be:

That’s it! Thanks. I suppose I should have tried that command myself.

I guess using that is about the only way we can actually see what kernel versions are installed on our systems.

Thank you very much.