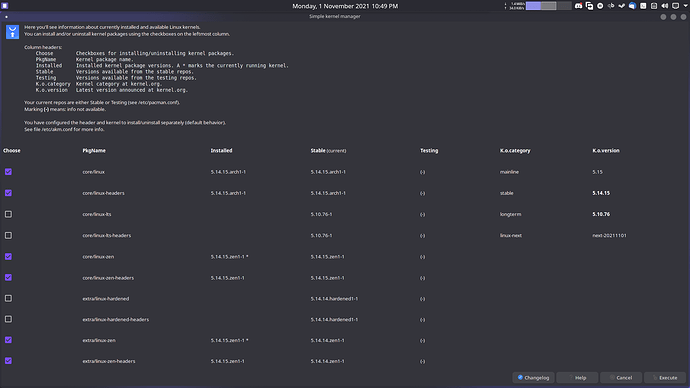 The zen kernel shows up twice, is this just a visual thing that will be fixed with an update or is there something i have to do?

It doesn’t appear to be an issue with the tool. At least in my mirror(and yours) the linux-zen kernel is in both the core and extra repos with the version in core being one point release newer.

Is it advisable to keep using the zen kernel till they fix the repo mix up?

It shouldn’t hurt anything. The newer version in core should have precedence over the older one in extra.

I installed the core version, and it shows both installed, including the extra

Ah you beat me to it! I was just about to post this, but good on you for catching it. I don’t normally open akm that often, but a post from just the other day got me to check it out and then I just opened it this morning after the recent update of all 3 kernels and saw it listed twice too in akm and thought hmm maybe this is something I should post about. But no need now, things seem to be okay in any case! 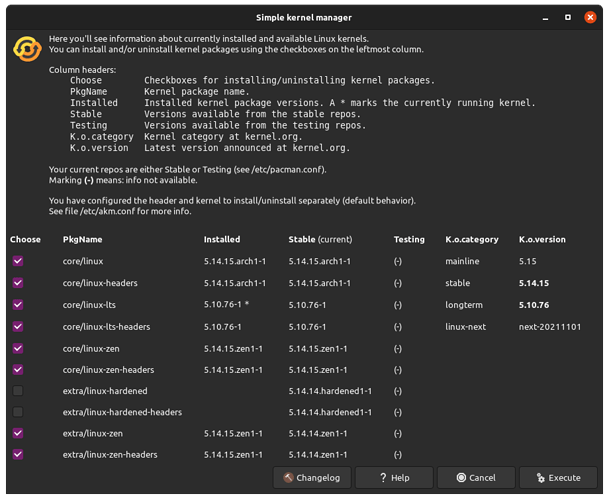 I installed the core version, and it shows both installed, including the extra

pacman doesn’t track the source of the package so I don’t think the tool would be able to tell you which one you actually have installed.

Arch currently has zen in core and extra. I suspect that this is a temporary situation, and will be fixed soon.
The same can be seen with

And as @dalto said, core takes precedence. That’s because [core] is written before [extra] in file /etc/pacman.conf.