RoRo's Question(s) of the Day

How long would you last in a zombie apocalypse?

What would be your weapon of choice?

I’m on a road that leads to a town where I hope to find water and food. I didn’t drink for hours and although it’s a quarter before midnight it’s still pretty warm.
A warm and dark night in late July. And it’s not just the temperature that’s uncomfortable, the humidity also is quite high. Everything’s surrounded by what looks like fog, although I’m not sure if it’s technically fog. Anyway, whatever it is, it makes it impossible to see beyond 20 meters or so.
The night is dark and quiet. I can hear the zombie long before I can see it. The noise of bloody, skinless feet on asphalt, the horrible grunts, you don’t forget that when you heard it once.
I stop. I try to locate the source of the sounds and I stare at where I think the zombie will appear any moment.
It looks like a shadow behind the fog first and then the zombie is in sight. It looks awful, stripes of skin are missin all over his body, he’s bleeding and there are black and green spots everywhere that seem to be rotting flesh.
He sees me and immediatly turns towards me while gaining speed. Those zombies are not to be underestimated. I won’t claim they’re able to run but they can walk pretty fast and they tend to jump at you from quite some distance.
The zombie gets closer any second now. It’s maybe 10 meters away now. Time to start my attack!
“Sir!” I say loud and clear. “Sir, would you like to talk about KDE Plasma 5.25?”
The zombie immediately stops. I can see him roll the one eye he has left.
“No? How about Richard Stallman? GNU/Linux?”
The zombie starts to back up, then turns to the left and switches to fast walking mode.
“By the way, I use Arch!” I shout as the zombie disappears in the fog.
That was the fifth one today. I’m tired and thirsty. I hope I will reach the town soon.

has suspense, scary moments, comedy and includes nerd stuff. If this were a movie, I would watch it

How long would you last in a zombie apocalypse?

What would be your weapon of choice?

I’d be The Last Man on Earth.

My weapon of choice:

How long would you last in a zombie apocalypse

Years. I could head out into the wilderness today and be set for quite some time.

I can go on and on, maybe not a good idea to touch really hot topics of the day, which are pretty obvious, but those already are enough to understand that reality is far beyond what people think about it

There are a group of Elitists who seek to control the world like from a James Bond movie.

Also this startling quote from a former U.S. President:

“Presidents are selected, not elected.”

So you are refining your initial question in order to receive the answers you’re looking for?

I’m the one asking the questions around here, Yo.

As for any so-called conspiracy theories, there goes a saying that after some time, they most oftenly become truth. Likely only after their relevance has become ‘part of history’ and no-one cares any longer what might have been going on ‘then’.

Thanks to the corporate media, who’ve become organs of repression instead of independent information, as a pillar of democracy.

Democracy? What, democracy!? Earth (Still Our Only Home.)

Oh no, I’m not answering that one, too spicy for this forum

That freedom of expression could be severely compromised in a democratically defined social order was considered a joke by most people not so long ago. Now we are seeing more and more that it is becoming reality.

And now mark my posting as whatever you want …

“Sir, would you like to talk about KDE Plasma 5.25?”
The zombie immediately stops.

There’s so so so many things I’ve had to say “I told you so” with lots of people, especially with things the last couple years. . . So I’m with @Kresimir and I’m going to leave this one alone. 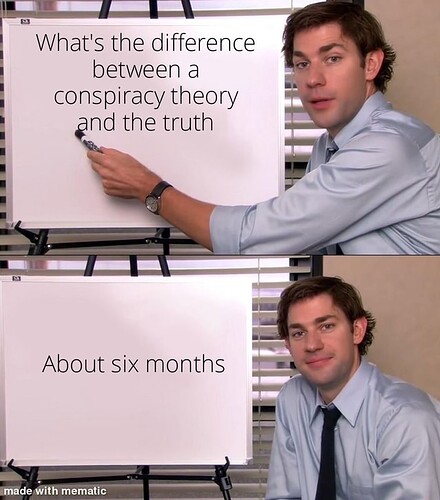 Yeah, I guess I should have used Gnome instead

What did you not appreciate as a kid, but do now that you’re older?

Yeah, I guess I should have used Gnome instead

One way or another, it is spoiled now

What did you not appreciate as a kid, but do now that you’re older?

Did you make all of these clown gifs?
Is there a source when I can get them?