Firefox and Waterfox in arch and debian are giving this error when opening, most of the time, in other occasions the error does not appear and it opens without problems.

I have been googling and apparently there are different opinions on this matter, since it is a bug until it has to do with Adblock, which I have installed – i also have HTTP Everywhere and NoScript and I have reconfigured too about:config … many options.

But i have been using Firefox with all this extension and configurations for years, this has never happened before … it started early today with this problem.

I don’t know what other information to offer to better describe the problem if anything else is needed please let me know … Thank you.

Looks like you should be patient and wait a few days for the issue to resolve. This is necessary from time to time.

"sec_error_ocsp_server_error" when trying to open a HTTPS page

What adblocker exactly do you use?
I always use 2 of those (with Chromium and Firefox).
In Firefox I use Adblock Ultimate and uBlocker Origin (which in my opinion ist the best adblocker available).
I never had any problems.

@Elloquin I saw it before in google but i don’t understoo …, Sorry, but where in Firefox or Xfce4 are these … Options->Advanced->Certificates-> Validation?

@Trekkie00 Adblock Plus (no, i’m not saying it is the origen of the problem, i don’t know nothing about the cause.)

Moving this to the newbie section.

@Keos
You can find the certificates in Firefox settings 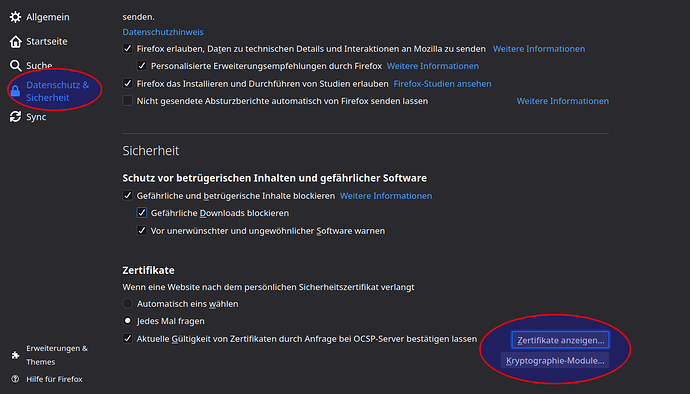 I looks the same but i’m not sure

Is it only Waterfox or also Firefox?
As far as I know Waterfox is based on an older Firefox version (ESR). And they are supposed to be quite slow with security updates. That could be an explanation for your issues.

Maybe this article is worth reading for you :
Why You Shouldn’t Use Firefox Forks Like Waterfox, Pale Moon, or Basilisk

It shows some very interesting facts.

I know that this post is off topic and doesn’t help solving your problem. But I think the topic is important enough to post it here.

They both have the same problem, even Firefox-dev too …
Years ago I ruled out the use of other browsers due to the great capacity to make modifications and configure firefox compared to the limitations that others have. I will read later what you recommend. Thank you…

They both have the same problem, even Firefox-dev too

You might want to uninstall your adblocker and see if that fixes the problem? I use AdGuard Adblocker on both Firefox and Chrome, and they work great. You can try it and see!

It happened again today but just one time, it is probably a bug.