I installed XFCE on my Chromebook but as with all Linux installers the grub install failed. I chrooted in and manually installed grub and rebooted.
I found it was auto log in live user, which was not present and failed, I removed that, I can now boot to tty1 and log in. The X session runs automatically, a feature I actually like. I have removed a fair number of packages and still have what I need.

I would like to know if I missed anything, ideally a list of commands not run because the installer aborted when the grub command failed.

grub was totaly not there?

The installer fails because the Chromebook needs additional parameters to install. I use the exact command attempted but add --no-nvram --removable

oh thats possible idd, i have no chromebook

this wil help eventual if someone got same issue.

I would like to know if I missed anything, ideally a list of commands not run because the installer aborted when the grub command failed.

if this happens installer stops before running the EndeavourOS configuration script, so installation is not fully proceeded, you can add the parameter into installer before starting it.

I have finished the installation, I would like to know what I can remove that was left behind?

After the chroot and grub install I just rebooted.

after grub-install we do run a script to setup the system, it removes unneeded files and packages and do configurations.

The grub-install options are set inside /usr/lib/calamares/modules/bootloader/main.py :
first part for EFI second one for BIOS: 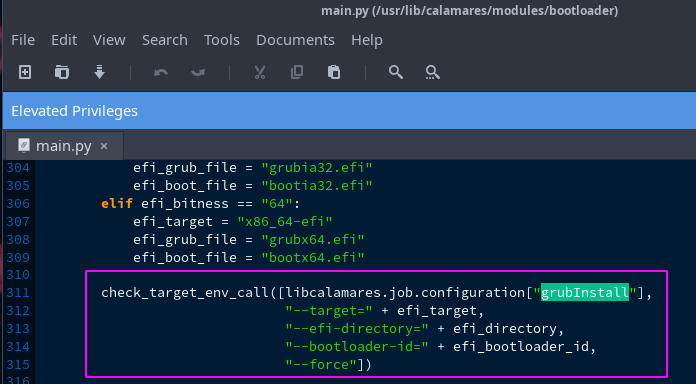 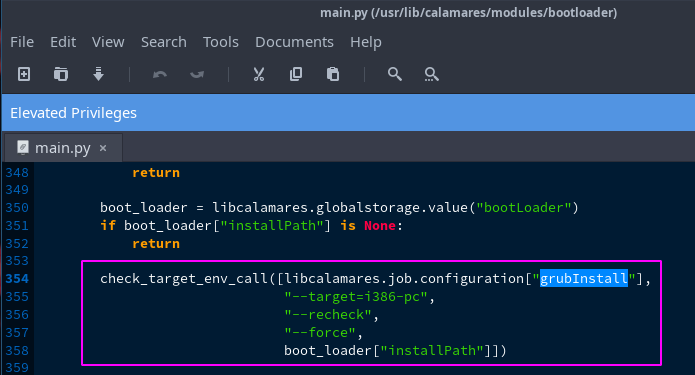 And instead of the grep | awk | sed | tail monster-pipe:

it is sufficient to only use awk:

(test before implementing, of course)

I leave it as an exercise to fix other such unnecessarily long pipe chains. Challenge: use only one or zero pipes per line.

create a Pull Request then?

This may be wrong but I just sudo xed

I would, if I used Github, sorry…