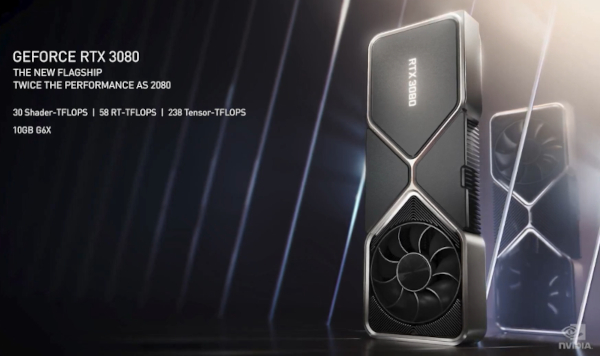 Do you need a nuclear reactor to power it?

Their new DLSS tech is all driven through the drivers. I am like, but…Linux??

I watched… despite of being cheaper from the previous generations, it’s going to be to expensive for me… In Brazil, the dollar is around 5,50 Brazilian reais…
Hard times…

thanks for the money bag

I may go for the 3080 to replace my 2080 Ti, and save the extra money for whatever new AMD CPUs come out this year. This is all going to depend if the comparisons they showed between the 3080 and 2080 Ti are accurate. And what AMD has at the high-end for GPUs this year as well.

Same. I want to see some benchmarks…and I will need to sell some body parts. It is a plan.

I’m kind of in a lucky situation, there is a certain U.S. electronics retailer that sells a 2-year replacement plan on GPUs where you can literally bring it back to the store and get a store credit for whatever you paid within that 2-year period. Since my 2080 Ti has been running much hotter than it was when I bought it, I’m going to take advantage of that. I know it is probably just in need of a new application of thermal compound, but since I paid for the replacement plan anyways, I’m going to use it.

Hmmm…3080…3090
need to dig more into that, @Othoric since you got access i’d appreciate any info on real use

I am running a 1660 Super Tuf card, so it would be a good upgrade for me. I just need the prices to stabilize and that means waiting awhile. I have been waiting for this release, lets just hope it stands up to the hype.

Marvels of NVIDIA Ampere Architecture - 2nd Generation RTX
Enabling the blistering performance of the new RTX 30 Series GPUs and the NVIDIA Ampere architecture are cutting-edge technologies and over two decades of graphics R&D, including:

I don’t know…something doesn’t feel right to me, all this super-mega-blistering selling points…
I’m willing to see some data

Meh, it’s new and shiny, but it’s still Nvidia under the hood. I still agree with Linus and his finger.

When they release all the source code for their drivers, then I’ll consider buying another Nvidia card…

Yeah, but i have my doubts about that 60% as well…
However still very interested to investigate more data

Also i laughed so hard when mr. chinese Nvidia SEO talked about coronavirus in the begining…Yeah right, GPU computing to solve coronavirus…aha…Somebody just got insanely rich on bitcoin mining