OK as I stated in a post yesterday I had planned to move my EOS partitions off a EVO 850 SSD to my M.2. This morning…

I deleted the partitions on the M.2,
created a GPT partition table,
then copied my EOS partitions to it,
shutdown the system,
disconnected the data cable from the EVO,
turned the system back on,
got the entering Grub and then just errors.

I have transferred OS countless times to new drives and always booted right into the moved OS without issue. Any ideas on what might of made this time different? Thanks

Have you tried reinstalling grub?

copied my EOS partitions to it

How did you do this?

The steps I followed are in my first post. That is the way I have always done it. Even going from a AMD AM3+ system to this AMD 4 Ryzen 3 3200g system I just shut down the old system, removed the EVO and connected it to the new system, powered up, entered parted magic, copied the partitions to the M.2(after creating a GPT partition table on it), shutdown the new system, disconnected the EVO, started up and booted into the new system without any issues to be seen.

Not sure how this can work without installing grub (or an equivalent) on the new disk.

Definitely worth giving it a go.

Maybe I should clarify a bit. When I say EOS partitions I mean The efi/boot partition and the actual OS partition. As I said This routine has never failed before.

Reinstalling Grub should fix it. What happened here seems to be that you changed the partition scheme to the point where the UID in Grub points to the wrong discs.

This could shed some light:
from your live usb, the output of the:

Do both devices have the same sector size? What size has your original efi partition? If your m.2 device is a 4K Native drive, the efi partition should be at least 260 MiB to be in FAT32 spec.

That makes no sense since I’ve always done it the way I described above. Maybe since there is a refresh just around the corner I’ll just wait and do a fresh install and slowly build it up, rather having to rebuild grub.

I’d have to copy the two partitions back to the M.2, had to delete them to be able to boot to the EVO again. That’s another odd one in and of itself.

Aren’t m2. drives and other drives (like ssd’s) named very differently in the system? That could make sense as to why a straight copy (without updating other things, such as grub) wouldn’t work like it did before.

I can tell you from experience my way never fails till now. Unless EOS does something a bit different exact location on the disk stopped mattering a long time ago.

Yes but the system corrects for that once it’s booted. I’ve seen it do it.

No there is one thing but I don’t see why it would be a issue, and that is on boot I get the list of kernels and the timeshift option instead of eos, advanced options, timeshift option. see image. This happened after fixing the nVidia drivers. 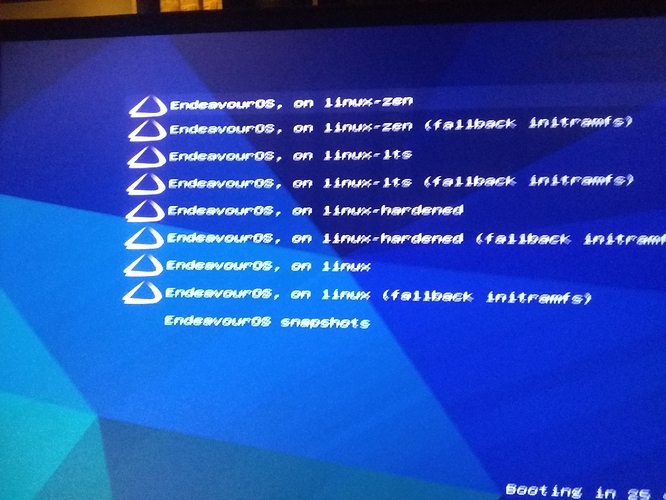 Not sure if this helps, but I did something similar, moved my EoS + Ubuntu + home partitions to M.2 from spinning rust, but not the boot partition, that I created that from scratch.
I then booted to the M.2 EoS using supergrub2 usb stick, fixed fstab so that /boot/efi it pointed to new boot partition (different UUID), mounted it and then installed grub with
grub-install --target=x86_64-efi --efi-directory=/boot/efi --bootloader-id=EndeavourOS
Of course instead of supergrub you could use the EoS live installer usb and chroot…

It could be any one of a dozen things causing the issue. At this point I’m just going to leave well enough alone till the EOS refresh since installed system is currently running great. 3 to 4 hours to reinstall and get back to the point I’m at now is no big deal just to make sure I don’t accidentally blow up the entire works. I appreciate the input and information.