Mate 1.24 has been released

For all the Mate lovers out there Mate 1.24 has been released.

After about a year of development, the MATE Desktop team have finally released MATE 1.24. A big thank you to all contributors who helped to make this happen. What's new in MATE 1.24 This release cont

I’m wondering if you want it on the new ISO ?

I built it on my computer… And it works 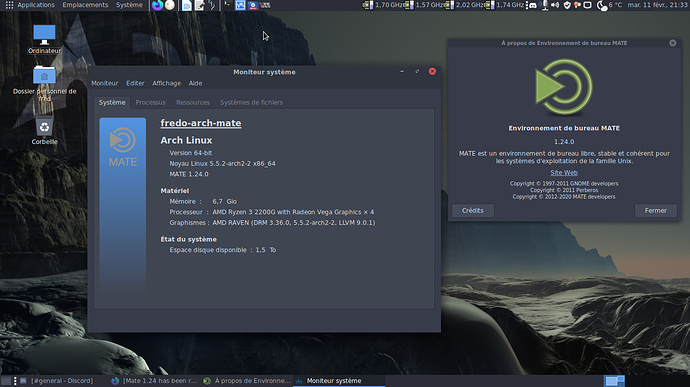 Did you find some important changes from the one before ?

Is much improvement as you know it well?

Did you find some important changes from the one before ?

I heard about UKUI. We’ll see.

Is much improvement as you know it well?

As far as I know: python2 removal, zst support in Engrampa, window preview when hovering a button in taskbar. And many other little things.

English:
Mate was born because one day an Argentinean with some free time took some good mates and said: That’s it, I’m going to do something great.

Actually it was something like that, Perberos a boy from Cipolletti, Rio Negro, Argentina, (Patagonia Argentina) one day he didn’t let Gnome2 die and started to work, getting later Mate desktop, which logo of the desktop is a mate seen from above and the arrow means the bombilla or sucker to extract the juice from the yerba mate infusion, very traditional and daily in my country as well as Uruguay, Paraguay and Brazil.

When will it be in the arch repos ?

It still not reached testing repo… But will come soon:
https://www.archlinux.org/packages/?sort=&repo=Testing&q=Mate&maintainer=&flagged=

I built myself Mate 1.24. It will take around a week to be added to testing, and another week to reach community.

@monsieurzik: you’ll have to be patient

The source packages are also available for download. Those who want to compile the MATE desktop themselves. https://pub.mate-desktop.org/releases/1.24/

Indeed. It is ported one package after the other in community.

Manjaro released Mate 1.24 to its stable repos and looks promising. I am eagerly waiting for it in Arch (EndeavourOS).

Well, it is not available as of today, February 19th in the testing repository… It is a little long, now!

And it’s still not available…

I don’t even see it in the link in Arch?

It is not available. I ask about it in arch-general mailing list, without any answer for now.