Many Desktops by default installation

I have a question yesterday I installed the xcfe desktop from endeavouros and also the i3 desktop, but when I start in lightdm it appears that I also have the gnome desktop, this is also installed when you install xfce? or is it an installation error ?. I would like to delete this desktop because I don’t use it and I don’t want to use it in the future either. I hope you can help me.

It probably came in as a dependency. Can we see the output of:

Yes, it is the output: 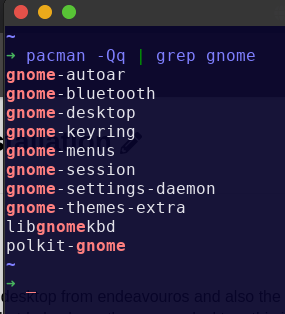 If you try to remove gnome-session does it complain or want to remove anything else?

How to remove that?

Do you install any packages after fresh install?
As gnome-session should not get installed with your combination.

Which ISO did you use?

I am using XFCE, but also I installed i3 desktop during the installation process.

I mean after booting into installed system do you install any apps?

And as @dalto mentioned give the output of:

Without say yes only to see what would get uninstalled, or if it say what needs it as a dependency.
A lot of apps from GNOME ecosystem pulling in gnome-session or desktop

It is the output:

You also have Budgie installed

Could be possible that you may have selected Budgie while installing?

Yes but I didn’t select that mmmm after I installed I followed this video to customize my desktop but I don’t remember that I installed Budgie.
UPDATE : How to Customize Your Xfce Desktop Look Like macOS Big Sur | Version 2.0 - YouTube

When you post outputs please use the </> marks and not screenshots, it’s very difficult to see, and is no longer searchable for other users as well.

I didn’t and don’t have time to watch the video. If you installed budgie to make your xfce look like a Mac then gnome is correct, as budgie is actually gnome.

You have all sorts of things installed it seems like, and if you need them, it’s up to you really. You should check whatever you installed when watching the video and it’s dependencies, but it sounds like that is the culprit to your many desktops.

It’s Nautilus, according to the video you had to install Nautilus, the default Gnome file manager. That brings in a lot of Gnome dependencies.
I also think that one of the packages in that video is custom made that also brought a part of the Budgie desktop with it.

Thanks a lot, sorry for the inconvenience I’m going to improve the way I create new posts.