When using encrypt w/ LUKS, swap with hibernate, base package+KDE+CUPS+accessibility the scripts get hung up on LUKS (installed successfully after eventually opting to not use LUKS): 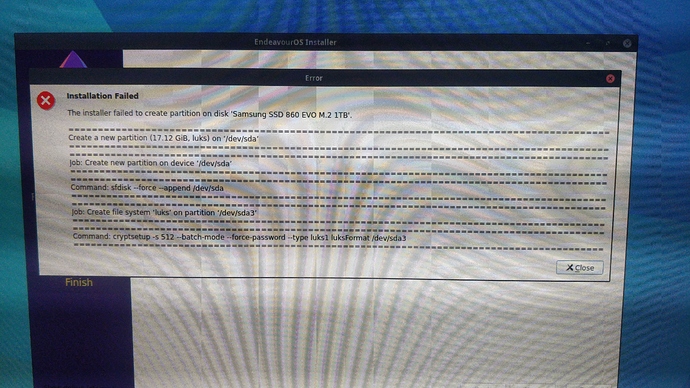 Other recommendation is to update the color of the “Show debug information” from black to the same white as “Welcome”, “Location”, etc. Black text on dark purple is hard to read.

Thank you for your bug report, the LUKS encryption problem has been with us since launch, this is a Calamares upstream bug and we have a workaround for it in our wiki.

Install EndeavourOS encrypted with swapfile, as the only OS on a Notebook/Laptop (mobile used systems) or on your Desktop. If you want to create a dual-boot first get knowledge on how to do this. T…

I’m not sure this is an easy task for us to solve since this text is shipped by default in Calamares and it is linked to the translation in the installer. @joekamprad, @fernandomaroto?

Other recommendation is to update the color of the “Show debug information” from black to the same white as “Welcome”, “Location”, etc. Black text on dark purple is hard to read.

That one has been taken care of for the next release.

styling for calamares is work in progress, and will be changed to be readable and slick with the next release @FLVAL is working on it…

on the two mentioned:

may we can change the text if this is from our own modules? @fernandomaroto i can have a look here too …

and caused by unsolved issues with calamares and arch based installation, LUKS only is working for one partition without swap or with unencrypted swap (you will need to first create swap and then /root better on manual partition module…) if you create more then one encrypted partition calamares will fail and crash…
You can add a swapfile after install if you need.

Thanks for the quick response! Glad the color issue is already fixed and there exists a well documented workaround to the LUKS issue. I couldn’t find the base string “Install packages.” in the Calamares en.ts for what it’s worth so I assumed this was something exclusive to Endeavour’s branch and easy to fix (haven’t checked your repo’s yet, will probably try to find tomorrow if I have time): https://github.com/calamares/calamares/blob/master/lang/calamares_en.ts

if it is from upstream calamares, and it is wrong or bad spelled… you can create a pull request there or create an issue on that also!

2 posts were merged into an existing topic: Branding Calamares improvement after net-installer release

may we can change the text if this is from our own modules?

I compiled a new version with more description directly in the modules and didn’t work, don’t know yet where is that description coming from.
For offline install the system display in the selected message, while for netinstall the message is in english.

Thank you for your bug report, the LUKS encryption problem has been with us since launch, this is a Calamares upstream bug and we have a workaround for it in our wiki.

On the wiki-page is a link to a forum post with a much more advanced way to have a encrypted system. As I am used to install encrypted systems (back with Ubuntu) this forum post is a good guideline for an encrypted installation. But you have to be a little bit experienced.
My last installation of EndeavourOS is a PC with two now encrypted hard drives. Maybe if I find enough time I will try to update the guideline with including the netinstaller.

For what it’s worth an issue has existed since at least early May. It looks like someone has also gone and recently placed a small bounty on it as well, so hopefully it gets resolved soon in time by the Calamares folk for the next rev of the netinstaller.

[partition] auto partitioning with encryption and swap is broken

Describe the bug With commit 2e39f24 as base for our current calamares-git build we see an issue with auto partitioning. When using...

It is not only a problem with auto partitioning and encryption. Every time you try to manually partitioning the hard drive the setup fails. The only installation that works with encryption is to install a completely encrypted system.

@Bryanpwo @joekamprad According to the issue comments it looks like this issue is fixed with kpmcore 4.1 which is slated to be released according to one of the core contributors in roughly two days. Hopefully that’s soon enough to make it for the next February EndeavourOS image

Thank you so much for the notification, we will certainly look into this and hopefully get it working very soon. You’ll be hearing from us.

3 hours ago source is updated: 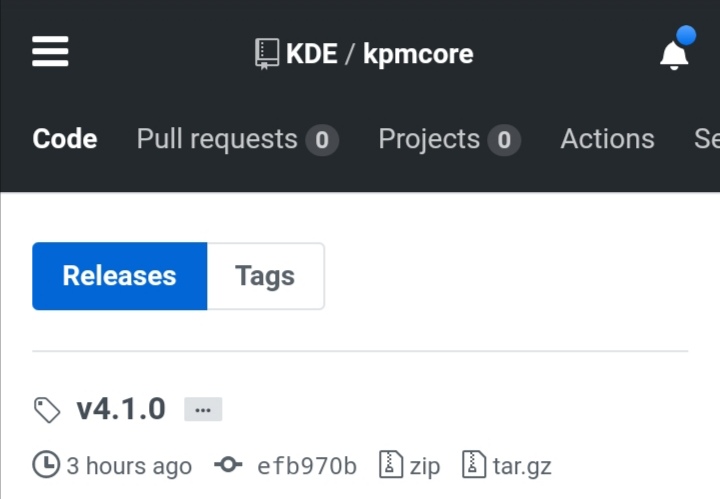 So hopefully arch will update package in the next days.

I’d be happy to test any pre-release EndeavourOS images to see if this is fixed when using kpmcore 4.1 if you’d like an extra person to do so.

I will give you a link when we have it ready!