Laptop stops working while endeavorOS installation process is in progress

A few months ago my intention was to install the latest release of EndeavorOS Offline Installer. Everything runs smoothly when tested on a live USB. The problem is that when the Calamares installer is in the “Unpacking Files” phase the laptop suddenly stops working. And forced me to force shutdown. Now finally I use another Linux distro based on Arch Linux, namely Archcraft until now.

Are you talking about online installation? Can you clarify “stop working”, do you mean screen freeze?

Is it possible you have slow internet? There was a timeout on retrieving packages which has been increased in latest iso and should fix that issue. But I never had a screen freeze on install. More hardware info would be useful.

No. I chose “Offline Installer” during installation. even mouse pointer and keyboard not responding (Freezing) during installation process. that’s what I remember at the time.
Here are the specifications of the Toshiba Satellite L645 laptop:
Processor: Intel Core I3 350M
RAM: Laptop Default RAM of 2 GB
Storage: Hitachi HDD 320 GB Speed 5400 RPM.

that’s less for even xfce/ does the same thing occur in i3?

Calamares installer ask for a min of 2.4GB ram to install the OS, im on a 2GB machine General system

Indeed. Installing linux on “unsupported” hardware is its own hobby!

It seems in the latest release, you must have at least 2.4 GiB of memory to install: [image] This seems to be a fairly arbitary limitation, what’s the point of it? This is a VM so I can bump the memory size, just curious.

How far back is ‘a few months back’ ? As far as I know previous versions of the EOS installer require more than 2GB of RAM, only the latest iso release can work with less. So make sure you’re using the latest ISO. (As I understood it, it tired to load all packages into memory before intalling them. If you don’t have enough, it will crash. But correct me if I’m wrong there)

With 2GB of RAM this can happen, online install should work better in this case, as offline will unpack an image stored on the ISO and rsync it into target. We do some tests on machine switch only 2GB of RAM but it could be that you may use Browser before install and not al of the RAM is available… and depending on the system it can be the case that GPU uses shared memory what left you with less RAM available too.

I hear from Calamares Development that they try to implement a way to not unpack and rsync the image and instead directly unpack it to target, what would use a lot less RAM in the process.

OK. Maybe next time will try to install it.

You are welcome any time!

Yesterday evening until late at night I finally ventured to install EndeavorOS. I downloaded the ISO via Torrent. and finally installed successfully. No problems found. 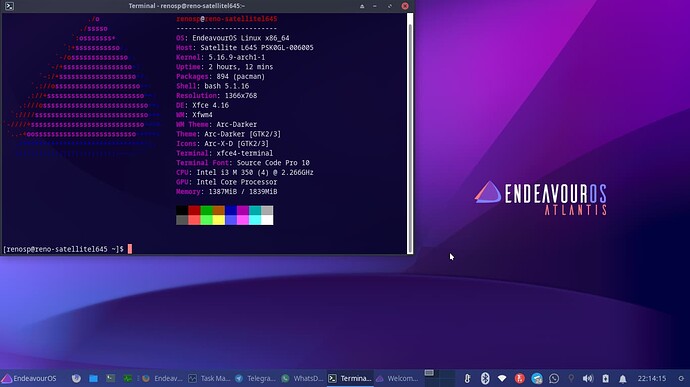