I have installed EndOS KDE on a MSI DELTA 15 AMD Advantage.
AMD Radeo RX 6700M with Ryzen 9 CPU.
Working perfect except the keyboard is stuck at full brightness blue… Its a rgb keyboard.
I tried the acpi variant in GRUB (acpi_backlight=vendor) to no effect.
Is there a way to simply disable the backlight ? Probably would not be possible to activate the backlight with the keyboard shortcut so if I could simply turn it off entirely that would be perfect…
The Screen backlight responds only with the slider in KDE. That is good enough…

Thank you for your time

See if you can find the model you have here.

Have you tried acpi_backlight=video and update grub after adding to the grub command line and reboot.

This is for the laptop display panel, not for the keyboard.

the keyboard is stuck at full brightness

If the current kernel doesn’t have built-in support for this hardware then there might be a driver/utility in the AUR:

or you could look in the BIOS/UEFI, or you could try a newer kernel (no idea which kernel you’re currently running…).

I used acpi_backlight=video on my Ryzen laptops for the keyboard backlighting. Not sure if it works for the issue on the MSI Delta 15?

Edit: One of them is for an error mesage related to the backlight. The other one actually has backlit keyboard. So as i say only way to know is to try it. It may not work?

Hi, I had this problem also on my Asus TUF A15 FA506QM. It got solved a while ago when Asus released a Bios update. DE XFCE

Could be you have the same issue, please check if you’re on the latest Bios. It’s a wild guess but i hope it solves your issue.

Sorry for the late reply.
Nothing worked as far as the backlight.
I did go back to Win and turned off the backlight there. Reinstalled EndOS but after a couple of reboots it came back up. Very confusing. Too bad as everything else works out the box but the blue light of the keyboard backlight is for me a show stopper… The funniest is even under Windows the backlight is a pain. I have no idea why one would be build a laptop with a keyboard backlighting not control in the BIOS for ex.

As far as I’m concerned they shouldn’t need to have software to control them. It should work from the keys as my lenovo does. You can turn it on or off and control the brightness. Mine is not RGB just a very nice hint. Don’t even know how to explain how it looks?

I should indeed work with the keys but it does not. Eveything else is… For ex, control for the display brightness work with the keys. I don’t know what to say. Its not even being turned off when the laptop goes to sleep.
Again, even with Windows on the Delta 15 the keyboard backlight is an issue being reported by many user.
Only when you install MSI Center on Windows can you then control the backlighting of the keyboard with the keys and of course through the center.

Besides this stupid issue with the keyboard backlight, its an excellent rig and fully compatible with Linux

It is my understanding on Delta 15 that pressing F8 repeatedly will select backlight LED level according to your preference. F9 decreases LCD brightness and F10 increases LCD brightness. Obviously this information is related to Windows as it is from the MSI manual for the Delta 15.

That is correct. What they don’t tell you is that if you do not have MSI center installed (probably adding drivers) you can press F8 to no avail !!
Another ex of this buggy keyboard backlight, if F8 works, you can turn off the backlight entirely (or even through MSI Center). Go into the BIOS and back into the system and you end up with a bright blue backlighting on your keyboard… Go back into MSI Center and check the backlight state for the keyboard and you will see it as off. Apply once more and then it turns off…

This is the worst implementation of keyboard backlighting I have seen.

Well all you can do is bring this it up with MSI. If it doesn’t even work on Windows I don’t see how it’s going to work on Linux. I guess you just have it turned off then since you can’t adjust it to be suitable.

I guess not. I am using EndOS and in my previous post was telling you that it came back to life after having gone back to Win to turn it off. It does not even dim when the laptop goes to sleep…
It has a life of its own.
As far as going to MSI, don’t think its worth the effort. Internet is already littered with complaints about the backlighting of this specific model. Also, its reasonably priced and the rig (besides the backlight of the keyboard) is simply amazing

Have to learn to live with it. Learnt also that if I want to use Linux and need to make compromises …

But I could get shot by sniper a thousand yard away with this bright blue light !!

I’ve recently purchased this model too (ryzen 9) and I agree that except for the backlight, it’s an amazing machine.

I found some info online about a linux substitute for the MSI Mystic controls, called “meestic”, but could not get it to work myself.

I will put this here just in case it is of some use to someone.

https://koromix.dev/misc (scroll all the way down) 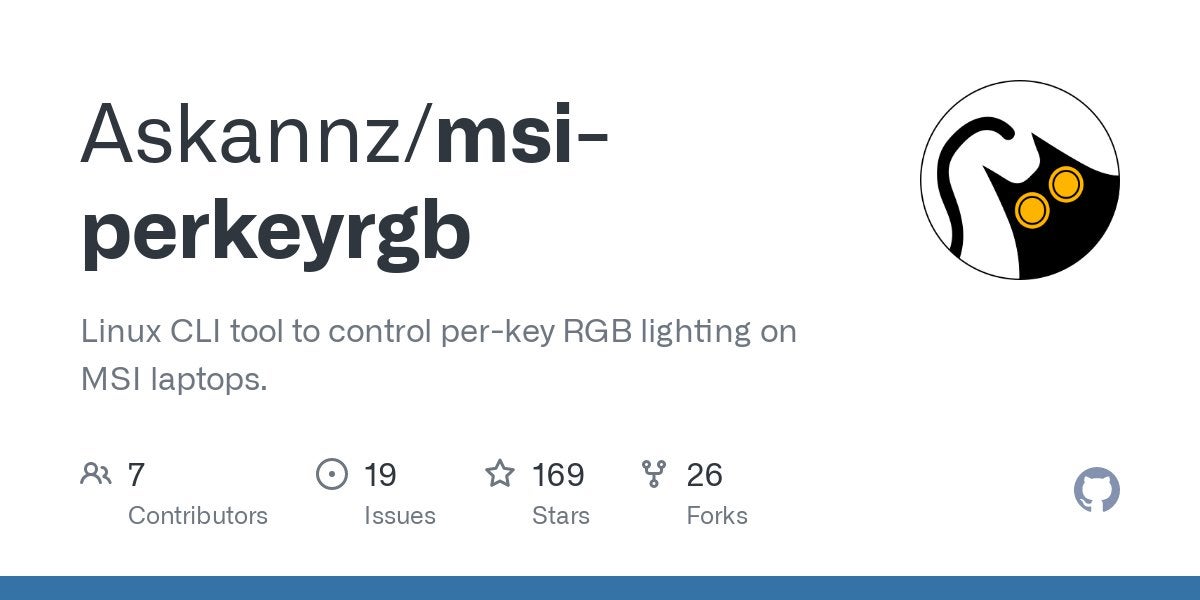 r/MSILaptops - [MSI Stealth 15M] Keyboard Backlight stays on all the time in...