This has been happening a couple of days now.
If I shutdown or reboot, or simply restart plasma, the desktop reverts to folder view.

I’m interested to know where this particular setting is saved.

For now, I right click desktop and set Layout: Desktop and ‘OK’.

Where do we go from here?

Anyone else try plasmashell --replace and end up with folder view instead of Desktop view?

Update:
If I copy plasma-org.kde.plasma.desktop-appletsrc and restart plasma, I see also the changes in meld.

So I need to find out why this is being reset…

Yes, I experiment the same. Always reset to folder view.

Right, something’s going wrong…
Right now I got it to the state that I can restart plasmashell without it resetting to folder view.
I just wanna know why it did that.

Also I’d like to know why Plasma doesn’t like you setting keyboard shortcuts - as I was setting it up again - got Latte with my layout, then I needed to put Alt+F1 shortcut on the menu - apply, exit and go back in, it just said there was none.

It took me a good 5 minutes to get that to stick.

@Ben I never could get the settings GUI to accept the “meta” key for opening any app menu launcher. I usually have to edit the following in the ~/.config/kwinrc

On your “Reverting to Folder View”, I have no idea.

Yes, I use ksuperkey to restore the Meta>application menu launch (but still you have to set Alt+F1 for the menu you want it to launch).

[ModifierOnlyShortcuts] Meta=org.kde.lattedock,/Latte,org.kde.LatteDock,activateLauncherMenu is in my kwinrc file, but annoyingly, as soon as the desktop is FULLY loaded it stops working. Something else is knocking it - and I can’t yet figure out what. Possibly another shortcut? but there are so many to troubleshoot, so I have to have ksuperkey running to get it back.

I managed to stop it reverting to folder view (again, no real clue as to what caused it…).

Something else is knocking it - and I can’t yet figure out what. Possibly another shortcut? but there are so many to troubleshoot

The one and only thing I personally do not like about KDE. So many settings in various places that can affect other settings. Sometimes, those settings are a bit hidden.

as soon as the desktop is FULLY loaded it stops working.

I am just throwing a thought against the wall to see if it sticks. Are you using a custom theme or any custom widgets or extensions? I have found that sometimes that a theme, widget, etc… can change some default behavior and prevent some settings from working. Also, if you are using one that has not been updated in a while, may also cause issues.

Hmmm widgets - there’s Event Calendar, LatteSidebarButton, Application Title/Menu/Launcher at the top, then Latte Tasks and Latte Tray at the side - I doubt if they’re knocking it - as when Latte is loaded, I can get the menu for a few seconds before it stops.

As you say - not so easy to track down.

LatteSidebarButton, Application Title/Menu/Launcher at the top, then Latte Tasks and Latte Tray at the side

Double check the settings between the Latte widgets and the Title/Menu/launcher. It has been my experience that Latte widgets do not always play well with other non-Latte widgets. That is one of the reasons why, almost a year ago, I went back to the default panel from Latte Dock. That is when I learned about the kwinrc file. Even after Latte Dock was uninstalled, it did not revert that file back to “stock”.

Widgets, like Gnome Extensions, can become unstable the more of them that you use. Interoperability is not a big strong point for them. I would disable them all, see if you get the “shortcut” key functionality consistently back, and then add them back one at a time.

Ditching a ton of extensions was one of the many reasons why I made the switch back to Plasma after a 9+ year absence.

Hmmmm so looking again, latte tasks - okay but on the same panel we have systray which isn’t native to latte. That’s annoying because I want it dodging windows… though thinking again - it’s not that often I use the tasks in the bar - I use a gesture to present windows and use that to switch desktops too.

I guess a good excuse to go even more minimal

Latte is a bit more resource hungry than the panel isn’t it? Maybe time to give it the boot.

But yes, worth a look - maybe tomorrow after a snapshot.

Forgive my ignorance but what is folder view?

@Bryanpwo I honestly don’t know either. That is why I am only working on the shortcut key issue.

For now, I right click desktop and set Layout: Desktop and ‘OK’.

You did tick the “Apply now” button before saving? 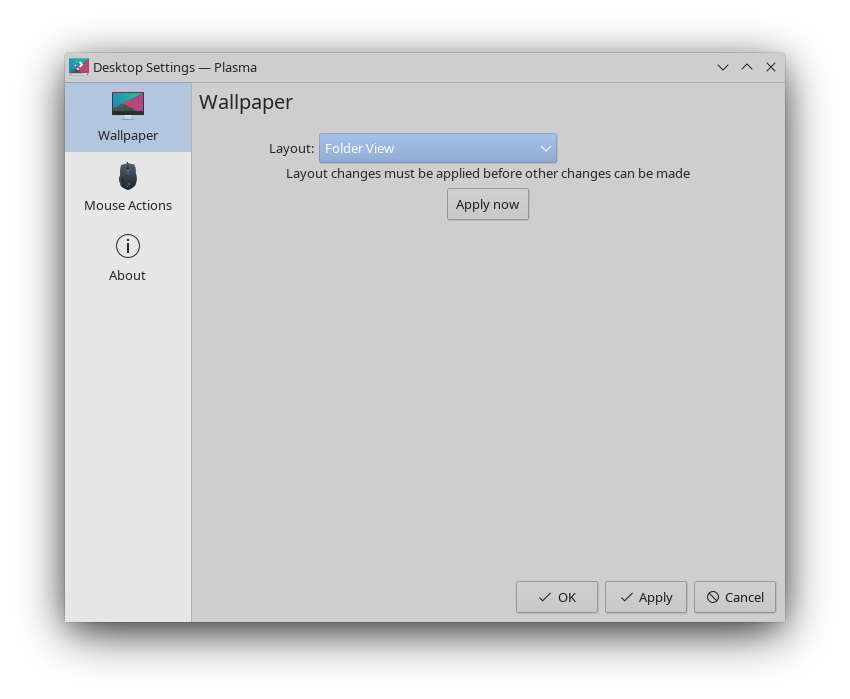 ‘Folder View’ is the traditional Desktop Layout.
The ‘Desktop’ is traditionally a folder that you can use as a folder… and you can decide what that folder is.

Interestingly another possible bug here - I set my ‘Desktop’ folder to be /home/ben/.local/share/applications/ which contains lots of ‘.desktop’ launcher files… but when I set my Plasma desktop to ‘folder view’ it doesn’t actually show that folder.

I think I’m going to hop over to my Test user and play a little there. 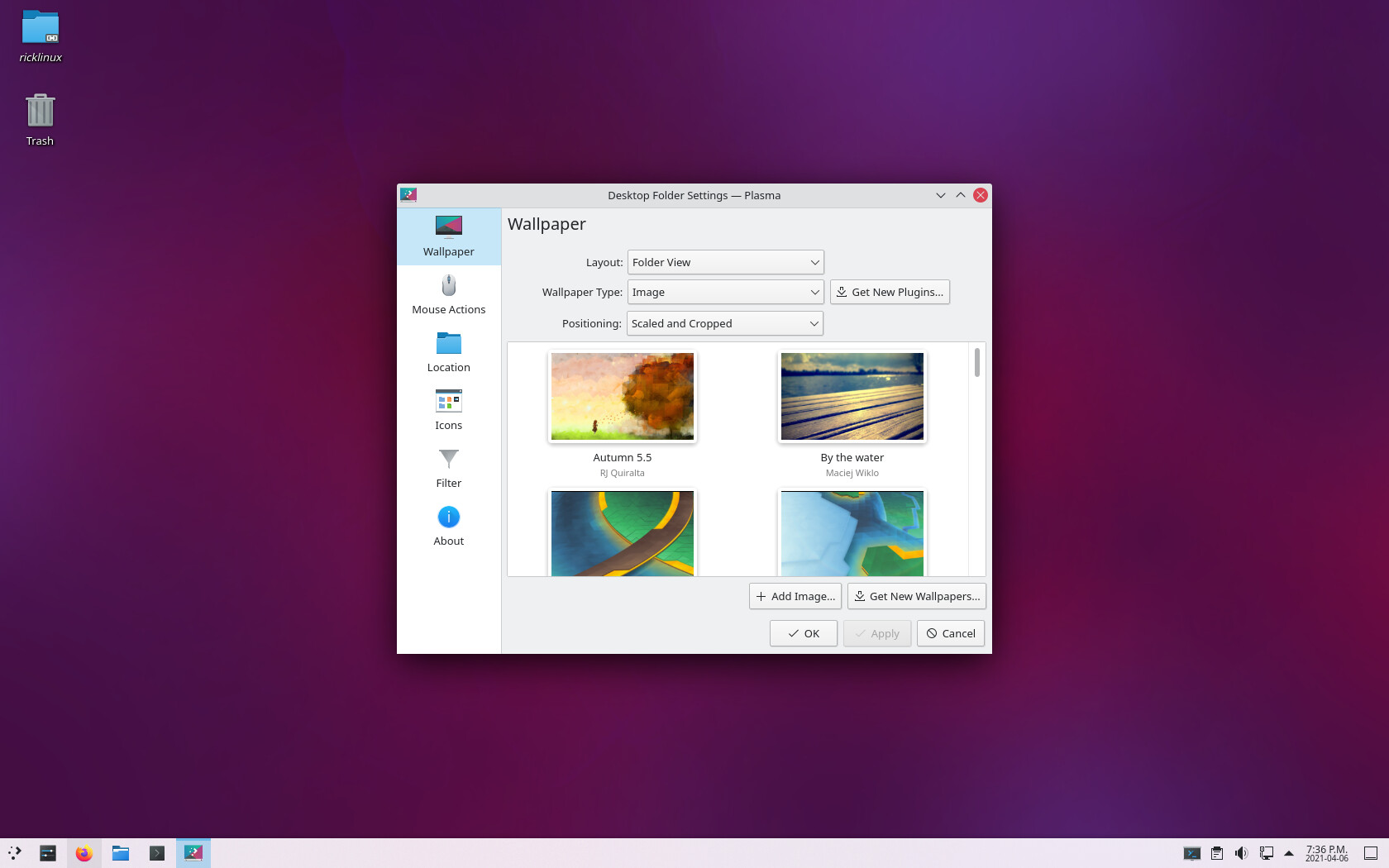 Yes, it’s ok now - however, I also noticed that the view is wrong, because in my ‘locations’ I set the Desktop folder to /.local/applications - and that’s not what appears.

See here, when I select Desktop in Dolphin (on the right) - it points there, yet when I open Dolphin from my Desktop it shows some other location…

‘Folder View’ is the traditional Desktop Layout.
The ‘Desktop’ is traditionally a folder that you can use as a folder

Thank you for explaining, I had no idea that was called folder view.