I’m using the pc and sometimes randomly the desktop background image disappears, my panels also disappear, my music player(taoun) shuts down and my windows cover all the space that the panels used to occupy. It stays like that for like 3 to 5 seconds and the things go back to normal.

my music player(taoun) shuts down

“shuts down” as in the music stops playing and when “things go back to normal” taoun is still closed?

Yeah, like the song stops and when I go to its virtual desktop I notice that the program has been closed. Sorry, I didn’t know how to say it correctly in english.
And yes, tauon is the only program that is closed.

Very occasionally I’m getting the other issues, but my music player (Strawberry) carries on regardless. Are you having any other issues with Tauon?

Sounds like KDE Plasma krashing rather than a problem with your music player.

No, this started happening today after I updated with pacman and yay. I received a bunch of warnings of missing things. I wonder if that is the cause of the problem, because when it happened before it was just the panels that were affected and all my programs were working.

What does the output show now?

I received a bunch of warnings of missing things

That could be just standard warnings when updating the kernel. In addition to running sudo pacman -Syu as @ricklinux has suggested, what do the last 100 or so lines in /var/log/pacman.log say?

And was Tauon running with no problems before today’s updates?

Taoun was working fine until today. In /var/log/.pacman.log there are a couple of warnings on the las 100 lines. Do you want me to copy them here on a comment?

Do you want me to copy them here on a comment?

It says that the system is updated

It happened again while I was browsing dolphin .-. 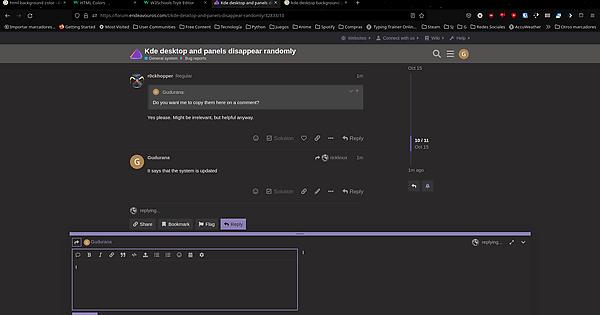 You’re running Wayland on AMD. Try switching to Xorg for a while and see whether the problems reoccur.

Those WARNING messages are normal despite BEING IN CAPITALS.

Is the system installed in UEFI?

Edit: One thing you need to do is update your UEFI Bios. It is WAY out of date. There are 7 newer updates. You should update to the latest version as it is very important to the functioning of Ryzen CPU.

Ok, I’ll try on xorg. I wanted to see how is the screen tearing on linux with x11 for a while, maybe it isn’t noticeable like on wayland

I don’t really know but it probably is.
Is there any command I can use to check that?