Quit being so logical, this is a forum after all.

Easy to install afterword, and don’t increase traffic. Yes on both counts.

i dont know why everyone fears BTRFS so much.
its very good and stable filesystem.
and the most feature rich in kernel fs.

I use btrfs myself and in my case it’s not the fear of btrfs but more that of and for inexperienced users.
Btrfs may require the occasional balance and scrub and you’ll have to get your hands dirty (=cli) to create and mount subvolumes, raids etc… These users mostly won’t know that the system doesn’t report the free/used space correctly and could run into a “full filesystem problem”. …

As I stated above, if you know what you’re getting yourself into with btrfs then the current EOS installer lets you use it already, albeit manually.
If you’re not going to use those nifty btrfs features anyway, why not just use the proven de-facto standard ext4? That’s why I don’t think it’s wise to “inflate” the installer with redundant options.

“none of the above”

I’d also be in favour of that option.

I wouldn’t want to be misunderstood, but I really appreciate the minimalism that EOS has gone into. Having written this I’m generally satisfied with the current shape of ISO. A lot of these issues would be handled by the Welcome, althought surely @manuel would have some work with it…

Regarding Btrfs, I would lie that I have not had some concerns about it in the past. Sure, ext4 is very stable and I’m using it but the former is also developing quite well, with interesting implementations planned. Anyway, if Theodore Ts’o, the principal developer of the ext3 and ext4 file systems, speak about Btrfs in superlatives alone, this is, in my humble opinion, a good recommendation.

I like the idea of kernel choice but didn’t vote for it in the poll, I was convinced by the comments after voting. Better late than never! That being said, current and LTS seem like the choices here, not all the other options.

I like the choice of BTRFS and ZFS. It really helps to have this in the installer for the average user. Beginners probably won’t choose it, and experienced Linux ninja’s will probably do it manually. To me, it is a value-add by the installer and the EndeavourOS to help with this process. That being said, I don’t think that ZFS is officially supported by the Arch Repo; it would seem that you have to enable unofficial user repos, build from AUR or add the ArchZFS packages to the EndeavourOS repos. As much as I would like to see it, it seems a little contrary to the EndeavourOS philosophy of not maintaining more packages.

Finally, I do like the idea of some sort of snapshot utility being included, but I don’t have a suggestion. Timeshift seems good, but again it is AUR, so doesn’t meet the criteria. 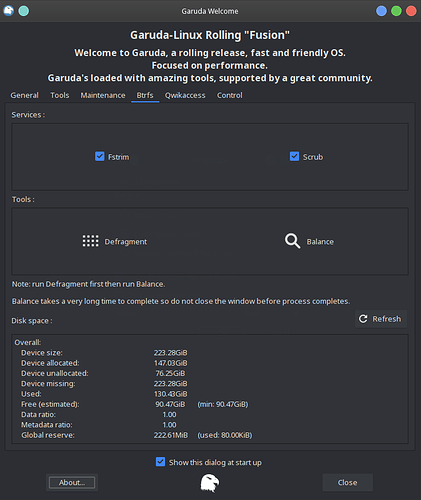 Timeshift seems good, but again it is AUR, so doesn’t meet the criteria.

You’re actually strengthening my argument for not implementing this.

Just like your example, this could be handled by welcome scripts if it detects a btrfs system; no need to add it to the installer.

hello, apart, the kernel lts in addition, our iso is fine as it is, I do not want it to be transformed into arco bis or other

Kernel choice absolutely… Bluetooth - yes as long as it defaults to off at boot (this can be tricky to achieve on other distros and it burns through my battery). As for the rest… well people can pick and choose what they like and learn how to set things up - surely the whole point of Linux.
Great distro with great defalts, genuinely appreciated.

a btrfs system; no need to add it to the installer.

BTRFS is already in the installer. One only needs to select manual partitioning to access it. 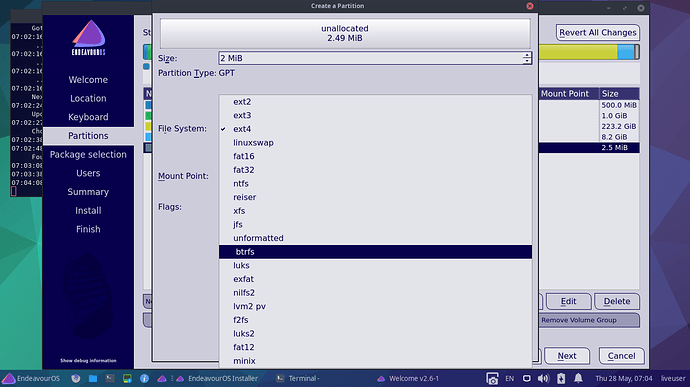 file_systems1366×768 124 KB
along with multiple other file systems. ZFS is missing because, if I remember correctly, Arch Linux does not support it.

Speaking of ZFS, here is Linus Torvalds thought about adding it to mainline kernel:

And honestly, there is no way I can merge any of the ZFS efforts until I get an official letter from Oracle that is signed by their main legal counsel or preferably by Larry Ellison himself that says that yes, it’s ok to do so and treat the end result as GPL’d.

Other people think it can be ok to merge ZFS code into the kernel and that the module interface makes it ok, and that’s their decision. But considering Oracle’s litigious nature, and the questions over licensing, there’s no way I can feel safe in ever doing so.

And I’m not at all interested in some “ZFS shim layer” thing either that some people seem to think would isolate the two projects. That adds no value to our side, and given Oracle’s interface copyright suits (see Java), I don’t think it’s any real licensing win either.

Don’t use ZFS. It’s that simple. It was always more of a buzzword than anything else, I feel, and the licensing issues just make it a non-starter for me.

BTRFS is already in the installer. One only needs to select manual partitioning to access it.

I know; that’s why I also don’t see the need to add it to the installer.

Because calamares already allows this, I was under the impression that the btrfs option in Bryan’s questionnaire and ve9cbc’s wish for btrfs inclusion referred to adding a new additional option, where a user could choose btrfs instead of the automatically used ext4 with the “Replace a partition” or the “Erase disk” option.
I don’t think this is necessary and would advise against it.

The btrfs option in the questionnaire didn’t make any sense to me otherwise; but my apologies if I somehow misinterpreted.

Is there any point in using Btrfs without all the fancy set up for snap shots and luks etc. I know that Open Suse uses it and i’m not sure how it is set up? I have it installed on vbox. I’ll be the first to say i don’t really understand it very well as far as setting it up.

I use it’s raid function for my /home directory. I have quite a large library of steam games. It has outgrown my 1tib ssd. So now it lives on 2 identical 1tib ssds in btrfs raid0 (so 2tib effectively) Which no one should do with out a strong backup policy.

Is there any point in using Btrfs without all the fancy set up for snap shots and luks etc.

Never had the nerve to actually implement this beyond some testing; but I guess a steam library can always be re-downloaded.

Because calamares already allows this, I was under the impression that the btrfs option in Bryan’s questionnaire and ve9cbc’s wish for btrfs inclusion referred to adding a new additional option, where a user could choose btrfs instead of the automatically used ext4 with the “Replace a partition” or the “Erase disk” option.

Indeed, that’s what I meant.