I use an Intel CPU and GPU on my workstation. Can I safely remove any vdpau packages?

Just doing some housecleaning. I was reading the wiki and it seems to be made by and for nvidia, but I’m not sure if some random important package needs it. Can I safely remove all vdpau packges?

In general, the procedure for determining whether you can remove a package is this:

Is the package a dependency for any other packages? To check, you can run

Alternatively, you can also just try to remove it, and if it tells you it’s going to remove something else along with it, just decline to do it. If a package is a dependency, you can’t remove it without also removing that which depends on it.

If however, it is not, you can try to remove it and see if anything breaks (if it does, you can install it back).

Also, it is a good idea to read about it on the Arch Wiki:

On an intel-only system vdpau is not used/supported for graphics but, as explained by Kresimir above, it could still be a dependency for other packages. On my hybrid nvidia/intel notebook, libvdpau is required by ffmpeg, avidemux, gst-plugins and others.

as EndeavourOS is not installing much as default selection aside from libs and drivers and full Desktop packages plus we do have some hardware detection that removes unneeded drivers for your hardware there is not much to remove what will not limit some features may needed.

You can minimize DE installs if you do not need a full featured Desktop Environment, p.e. on GNOME you could remove GNOME apps like music documents and disable tracker, or on Plasma you could remove unneeded kde apps.

As i do currently work on minimal install sets for them i can give a list of minimum needed packages:
plasma: 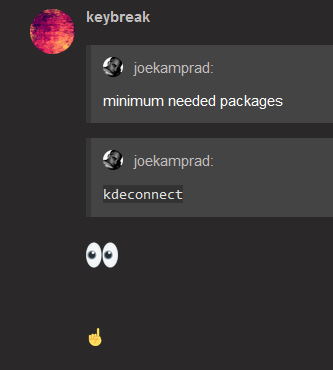 i do currently work on minimal install sets

So this is all that is needed for a minimal plasma install?

It’s a very good selection of packages, though I wouldn’t use the word “minimal” to describe it. A truly minimal Plasma install is simply:

and nothing else. However, that’s really minimal and you’ll almost certainly want more than that.

contains a bit more to make it usable, and there is also

which is the full Plasma install, but without KDE applications (so you’ll probably want at least Dolphin, Konsole, and Kate in addition).

Joe’s package list seems like a very good balance. I would only remove sddm from it, since it’s a dependency for sddm-kcm and gets pulled automatically.