How Do You Keep Resource Usage Low?

So then I just let it run. But does it have to run daily or I can change it to weekly?

But does it have to run daily or I can change it to weekly?

You can change it to weekly if you would prefer that.

Don’t edit the system timer as that will get overwritten whenever the package is updated. Instead, make a copy of updatedb.timer in /etc/systemd/system and edit it there. Alternatively, you can use sudo systemctl edit updatedb.timer and create a new entry for OnCalendar= but I find that method somewhat less intuitive than just copying the file and modifying it.

make a copy of updatedb.timer in /etc/systemd/system and edit it there

Great! Thanks for taking your time explaining!

I will go the copy-edit route and and change the timer to weekly. Hopefully everything will be working as smoothly as before.

I don’t do anything. Never really had issues with running out of memory. Unless running heavily modded mincraft that is.

Right now I am using 4.8GB of ram with two firefox windows open one with 3 tabs one with 6, Evolution, pamac, signal, Remmina with an RDP connection open, terminal. 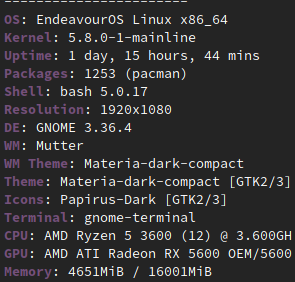 This machine is fine enough, it has 16 GB of RAM and a good processor. I’m considering getting EndeavourOS on a machine with 4 GB of RAM and a rather weak processor (2015 Intel Pentium N3700 (4) @ 2.4000GHz) hence why I made this thread.

Anyways, thanks so much everyone for all the responses, I’ll try to implement most of these on a day to day basis!

Also, how do I disable file indexing for MATE?

@MagusZ there are a lot of ways to reduce the number of packages and services running, but in the end you’d want to think about the reasons why you’d want to do so.

If it’s ambition to see how sleek you can make the system, that’s a geeky goal I can understand. It’s an honorable tinkerer’s mission

But if you are not genuinely worried about the OS eating away resources, or are satisfied with the performance, I’d say there shouldn’t be too much worry. RAM usage stays higher after some time, but that is mostly the cached memory. If you don’t run out of RAM, a restart is not necessarily a good idea.

Check out this old thread regarding this topic. There are many views, mine included, that if you have the drive space to spare, 100-200 packages worth 1-2GB is not the end of the world and it wont affect performance, while providing useful tools you might need:

How many packages is to much, before its bloat? Lounge

Those are the real resource eaters. But not of their own fault.
I develop websites for a living and I can tell you the libraries that go into building a site nowadays are so complex and bloated that a website (think reddit, facebook) can easily gulp 1-2GB of RAM by itself.

On a 6-core/12-thread CPU, 32GB RAM machine reddit still freezes after scrolling for a few hours.

Yeah, the Internet is the real kicker of them all, even with my extensive setup (uMatrix + uBlock Origin + a few other tools) it’s still easily what takes up the most RAM. As of now I do want to get resource usage on it as low as possible because it begins to start swapping with the amount of tabs I have to use for school (which was online-centric even before the pandemic) with literally anything other than Lubuntu and I’d rather use Arch than Ubuntu.

The Internet today expects you to have a good machine so it can wow you with its bells and whistles. That’s the trend and it only gets worse I’m afraid.

This machine is fine enough, it has 16 GB of RAM and a good processor. I’m considering getting EndeavourOS on a machine with 4 GB of RAM and a rather weak processor (2015 Intel Pentium N3700 (4) @ 2.4000GHz) hence why I made this thread.

I think you will find that if you run the exact same processes you run now they will use less ram over time on a machine that has less ram.

For example, on my workstation falkon will use about ~500MB per tab but on a machine with less ram it will use drastically less than that. Linux doesn’t try to conserve the resources, it tries to utilize them.

I guess you’re right in that it should be less, Linux RAM management for the most part has worked just fine for me. I just want to minimize as much as possible because on any given day I never know how much I need, and either way that old 2015 machine was my daily driver for a long time (I only got this good machine back in June and had used that old thing for a few years at that point) so the habit of minimizing as much as possible stuck with me.

So you’re the one to blame for slow websites… !

Although, in my defense, even if I go to great pains to make my sites as light as possible, sometimes I work on other people’s projects with painful legacy, or there is simply no budget for optimization and the customer makes a compromise on the expense of his user base.

I am running EOS KDE on a 4GB machine with pentium processor . It’s not lagging in any way . But my friend with an i5 got hung up on boot

I do literally nothing to keep resources low. I just use my computer and it doesn’t seem to let me down. I rarely break over 6gb usage ever. Currently:

By eschewing all forms of personal land & sea mining, voting for like-minded pollies, harassing companies to get out of fossil fuels & stop being fossil fools, moving my superannuation to a fund manager with similar ethos & acceptable performance, buying only what i need not want, going vegetarian, not wasting food, minimising driving to the point of virtual abstinence, stop using my gas space heater in the mornings & now only at night [hence wear 42 layers of clothing]…

Oh, did you mean something else?

Today running Plasma with 4 gigs is totally possible and without lags.

With respect to lowering the indexation, it does not make much sense, really everyone knows how the bag fits, it is simple.

You have little ram and a modest processor, in addition to a little skill, so run a window manager like Openbox or a lightweight desktop like LXDE, maybe XFCE without much cosmetics.
Also some i3 or JWM, etc.

In the end, it’s like life itself, only you know which way to go.

My resources are already quite limited. I use Xfce or LXQt desktop environment. I don’t run unnecessary services. I also close programs that have not been used for a long time.

So, you know how the suit fits, that’s what I meant.

Well, I know my limits, and I rarely wear a suit.

If you don’t have a lot of RAM, and if you also have a rotating hard disk or an old SSD, you should have a look at zram.

In my experience, it makes swapping much less “intrusive”. Although it might sound weird, on a 4G machine you can give zram 1G from your RAM. Don’t reduce your swappiness (vm.swappiness) value too much in that case, because you do want swap, especially when it’s faster than your storage devices are.

Arch Wiki has enough information to get you started.
IMO the easiest way is to use systemd-swap.

My old Core2Duo with 4G is rarely in use, but it still makes for a plesant experience for simple multi-tasks. No, you can’t open 100 tabs in Firefox, I’m afraid!