A new window manager I never heard of before I read this article maybe 5 minutes ago. Seems to be interesting.
Looks like the creator likes german names for programs :

I liked the name of the e-mail client wanderlust. Unfortunately I am a happy mutt user, so I needed an other application with a similar name.

Not to forget :
the translation of the name is autumn air

I, also, enjoy it. Although I have to say I find bspwm, much better.

Not that it has anything to do with anything but I still can’t see that and in my head not read “Bhaalspawn”.
…Yes, I played a LOT of Baldur’s Gate back in the day.

I don’t do games on computers at all … sorry I have no idea what Baldur’s Gate is… I’m simply out of touch.

I remember the name of the game but never played it. I think it was back in the 80 or early 90s

Looks very interesting! I think I’m going to give it a try. And it’s in the Arch repos:
https://www.archlinux.org/packages/community/x86_64/herbstluftwm/

the translation of the name is autumn air

A beautiful name, but I highly doubt it’s pronounced the way the author of the article claims:

After some digging, it is apparently pronounced as the following: herbs + laugh + umm .

Herbst ist quite easy. The e after the H ist pronounced like the e in evaluation. No letter muted.
A lot of english speaking people tend to pronounce that e close to the german ö. Like in herbal.
Luft would be pronounced Looft (oo like in the word school but shorter).

I was just listening to the pronunciation via Google Translate

It’s an role playing game for the PC based on Dungeon and Dragons 3.5 Edition that came out in 1998. So a while ago.

@Beardedgeek72
So I missed the target. I thought it was approximately 10 years earlier.

Have anyone been using hlwm? I can’t figure out how to resize (or at least zoom) floating frames with keyboard keys. The documentation is not the greatest and all I’ve seen so far refers only to mouse bindings

The “normal” resizing doesn’t seem to work on floating frames…

This is how I speak it as a native german speaker

Does anyone know the origin of the name of this window manager? Was it created in autumn or does it have to do with the way of the wm works? (I ever used it, hence my question)

L"uh"ft is about right for US English speakers…

“Deutschesprache schwere Sprache” is what my oma always said…

To me it sounds close to ‘(lu)mière’

Was it created in autumn or does it have to do with the way of the wm works?

I think it’s the latter. It’s probably was the author’s intention that the user should be as bad in pronouncing its name as in configuring it

That seems to be my case anyways

As for the name… here’s what the site offers in its FAQ:

I liked the name of the e-mail client wanderlust. Unfortunately I am a happy mutt user, so I needed an other application with a similar name. 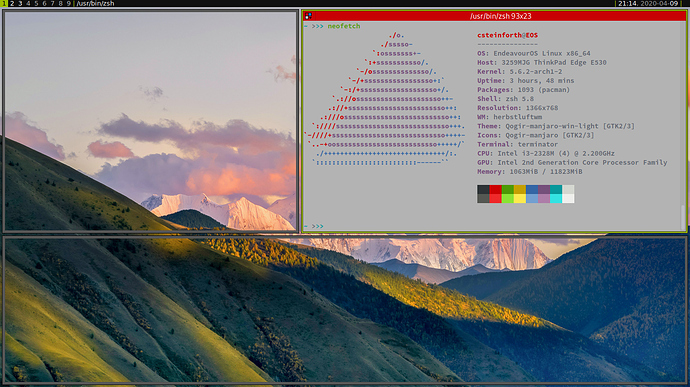 I just completed an install and setup of HLWM version 0.8 on my ArchLabs laptop. Here’s a screenshot. The hlwm autostart dotfile is here: autostart.tar The infrastructure setup (for all my wi…