Heads up on Etcher

There is whole topic here where we discuss the privacy issues in detail. I am sure I can find it if I look around.

Yeah after that discussion about Etcher on EOS forum I also switched to popsicle. Quite a neat little utility, it’s the first time I ever checked the md5 checksum of the iso i was burning, just because it’s so easy to do with this tool.

I do not invent anything with what I say, but it is the truth of always, only that.

I found the previous post, it starts here is if anyone wants to read it:

[SOLVED] Is Anyone Else Having Trouble Upgrading balena-etcher? General system

I would stress that while there are real privacy issues they are pretty far from the worst I have ever seen. For many, what they are doing is well within the bounds of acceptable.

The bigger issue for me is the way in which the company handled it and their casual disregard for it being an important issue.

I use it and haven’t noticed anything.

Of course you haven’t. The nature of privacy leaks is that they do what they do in a way that isn’t obvious unless you purposefully inspect the network traffic.

I think there was more, but that’s already enough.

For many, what they are doing is well within the bounds of acceptable.

The bigger issue for me is the way in which the company handled it and their casual disregard for it being an important issue.

I was using Etcher back in the day, but transitioned to SUSE Image Writer. Seems to always do the trick.

Frankly, the whole concept of Balena Etcher is utterly absurd to me.

dd does exactly the same thing, plus much more. The size of dd is 75 KiB, and that’s dd from the GNU Utils, i.e. one of the most bloated versions of dd in existence.

In other words, Balena Etcher is approximately 3000 times bigger than dd!

In fact, that’s more bloated than me after devouring a whole tin of Heinz baked beans for dinner.

Why is it so bloated? Because it’s an Electron App. It has the entire Chromium browser embedded in it. Millions of lines of code. For what purpose? To display a button that says “Burn” or whatever. But hey, it has rounded corners!

Don’t get me wrong, Electron is an interesting technology, great for creating complicated GUIs and desktop versions of web apps. I’m not hating on Electron (much). But why on Earth would any team of software developers think that it is a good idea to write an image writing utility as an Electron App? The only possible explanation for such absurdity is that they are utterly incompetent as programmers and that JavaScript is the only programming language they know.

And yes, it connects to the internet (because a program that writes images to drives needs an internet connection, right? Wrong.), and yes, there were many rumours of it spying on its users and collecting sensitive data. So it’s not only bloat, it’s probably malware, too.

I don’t understand why any sane person would use such a ridiculous utility. Or why any distro would recommend it (or even worse, in case of Manjaro, keep it in its repos).

Just stop it. Use dd or Ventoy, or Popsicle…

Here is a solution I have been using for years. Disks is available for most GTK DEs.

[SOLVED] Is Anyone Else Having Trouble Upgrading balena-etcher? General system

As a Gnome head, I have been using “disks” for years with no problems what so ever. [Screenshot from 2020-06-01 10-52-43] Highlight the target USB drive, click on Options, then Restore Disk Image, then navigate to the source ISO. I don’t know about speed, but it is very reliable. Pudge

I use it because it always works for me.

I just feel the need to say this: 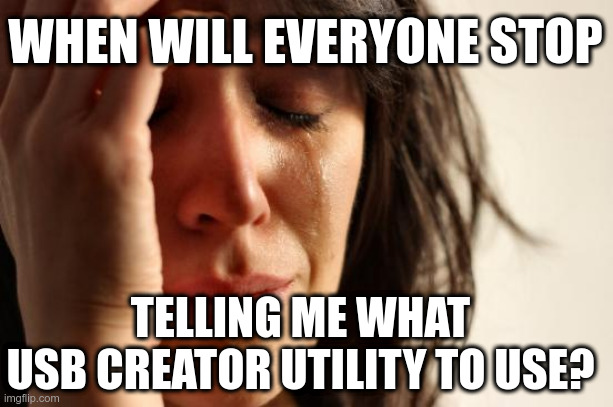 ^ That quote is taken slightly out of context. There is a 330 or so words rant before it, that sets the context.

Besides, unlike strangers on the internet who don’t really care, if your friends and family also tell you not to use Balena Etcher, that’s because they mean well. They see you’ve made a poor choice in life, and they want to help you!

to address all that

Although, if we’re speaking purely about freedom of choice - of course everyone should use whatever the hell they want to, even if it’s not good for them

No amount of words can properly express insanity

Maybe I should write an even bigger rant?

that they are utterly incompetent as programmers and that JavaScript is the only programming language they know.

How DARE you sir?!

There are plenty of…well all right, if you know some bash, python, basic, C as well…
I guess it doesn’t count

I mean, they also know HTML and CSS (they need to know CSS to make that nice button with rounded corners), but these are not programming languages.

I mean, they also know HTML and CSS (they need to know CSS to make that nice button with rounded corners)

This is mind blowing. With GPT-3, I built a layout generator where you just describe any layout you want, and it generates the JSX code for you. W H A T https://t.co/w8JkrZO4lk

Do any of my mutuals have access tp the OpenAI beta or know a way I can get bumped up the OpenAI GPT-3 waitlist? I have a clever idea I want to prototype with it.

I wouldn’t be so sure

There are so many options for this if you want a GUI. Suse studio Image writer would be my choice if preferring a GUI app for this.

Of course use whatever you prefer. I prefer to keep my install sparse so etcher does not make my shortlist.

I’m using Disks, and everybody should!