if all mounted properly then sudo arch-chroot /mnt

do you wanna have little fun : sudo systemd-nspawn -b -D /mnt

Thank you for this explanation. The guide had me a bit confused but you’ve cleared it up. I’m now back on my regular installation, and I’m so grateful for the help I got from this thread. I’m still new to linux as you can probably tell and without your help I would probably be dead in the water.

Hey
So i recently made the switch to linux from windows so im still new to this.

Today i updated my system and restarted my pc when i came back it had booted to Windows(as i had not uninstalled it yet) and i think that might have broken something because when i tried to boot Endeavour again it just fails. It tries to boot but then the screen goes black and it opens bios.

Would give a video but not sure how to include it here.

Hope someone can help me with this.

this is exactly the issue discussed here or not?
the solution is here:

(Grub 2:2.06.r322.gd9b4638c5-1) Grub Update Causing Unbootable OS On UEFI Systems A grub update today is causing boot issues on UEFI systems. It will make most systems unbootable so take care! with no intervention, the system will just boot directly into Firmware with no way to boot the OS. If you have this issue follow these instructions: First boot onto an EndeavourOS Live ISO. Ensure that you are booting the ISO via UEFI mode. Follow these instructions to chroot into your install: ht…

But I don’t understand them.
My partition is encrypted and I don’t know which commands apply to me. 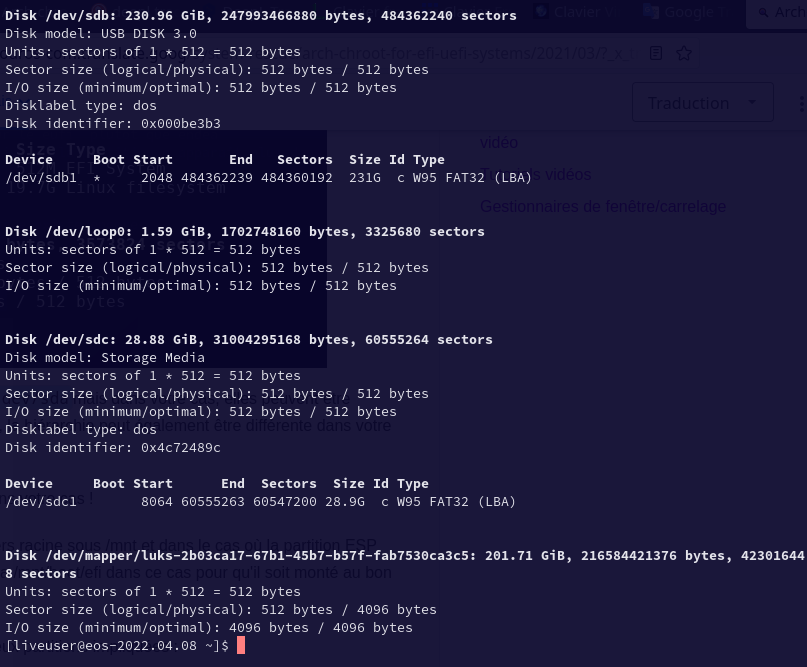 Just what are the commands specific to my case

Could you please help me ?
Thanks in advance.

pls check arcolinux they kept grub on hold for 5 years
EnOs can this as well?

EOS doesn’t have an overlay repo so we cannot hold packages coming from arch.

oki then in the installer offline torn off pcaman pkg grub?

Your efi partition is /dev/sda1

If it is ext4, it would be something like this:

oki then in the installer offline torn off pcaman pkg grub?

Unfortunately, that isn’t understandable for me.

That would just put every system in a permanent partial update status that would require manual intervention to correct.

It is more likely we would do the opposite which to update the version of grub on the ISO to the latest.

It is more likely we would do the opposite which to update the version of grub on the ISO to the latest.

This seem to be a better way to fixing it. Nova incoming ?

Hi, having trouble arch-chrooting into my home directory in a LUKS encrypted vlume, the error I get is just that the directory /bin/bash can’t be found.
I mount the LUKS system as described
sudo cryptsetup open /dev/nvme0n1p2 mycryptdevice
sudo mount /dev/mapper/mycryptdevice /mnt
sudo mount /dev/nvme0n1p1 /mnt/efi
sudo arch-chroot /mnt
I then get the error message
“chroot: failed to run command ‘/bin/bash’: No such file or directory”
/bin/bash can be found at /mnt/@/bin/bash and I’ve tried copying it to /mnt/bin/bash and even /bin/bash but still the same error.
I’ve found running sudo arch-chroot /mnt/@ “works”, but I get the following error message as well
==> WARNING: /mnt/@ is not a mountpoint. This may have undesirable side effects.
Running grub-install then gives the error message:
grub-install: error: cannot find EFI directory.
Any help on what I’m doing wrong please?

It because you are using btrfs. @lugh wrote instructions for this above. Here is a link:

Hello, Just in case it can help others, here is what I did to solve this grub issue on encrypted btrfs disk. First boot on live usb from the last EndeavourOS iso downloaded on the website. Then I followed the expected procedure: The latest grub package update needs some manual intervention But since it might not be obvious to everyone, here his a quick summary. Get the actual partitions name: sudo fdisk -l sda1: EFI sda2: Linux File System (pay attention to adapt the partition name to you…

Thank you very much and to Lugh, I didn’t even realise I was using btrfs, I suppose that’s what the “@” signifies >.>.
Working now