Greetings from the Netherlands!

New to EOS but not that new anymore with Linux. Tried it in the past, mostly Ubuntu and it’s flavors, but when Proton came around I landed on Manjaro around 2018.

Learned a lot there and now it is time to move to EOS.

Currently trying it out in VirtualBox with the Cinnamon DE and fixing my installation script so that when I do the real installation, my whole desktop is the same as it was on Manjaro.

So far so good, the only problem I have yet to figure out is why QT apps are not skinned with my Kvantum theme like they are on Manjaro. But that might be a topic for another forum category.

All in all, this is a nice next step to get closer to pure arch!

You also welcome then!

Hopefully you find answers to your questions, but feel free to ask anything you don’t find. What kind of stuff are you looking to do with your script? Just theme settings or do you get fancier (anything past that is considered fancy in my book) than that?

It started out as something simple. I believe I initially wanted to quickly remove the apps that came with Manjaro that I don’t use and install the ones I always install.

When I did that, I then asked, maybe I can copy over settings of programs? Gotta love that .config directory. Eventually I wondered if it was possible to set cinnamon desktop settings. Here I learned about the dconf editor and how gsettings worked.

So my script now installs my programs, remove some I don’t use (not that many needs removing with my EOS Cinnamon DE), copy over program settings and then set’s up my whole Cinnamon desktop with personal tweaks. Xed, Pix and Tilix also stores settings in the dconf so those I also picked up.

Lately I also learned how to set up my custom keybindings with the script.

The issue I had was with Kvantum not theming QT apps, but I learned I also needed to take the settings (and install) qt5ct and do a echo statement to my .profile so that my qt5ct was being used.

That’s very fancy. Do you reinstall * often and get a lot of use out of it? I’m still learning a lot about set ups and partitioning and that stuff, but from some of what I’ve read things can be set up to make reinstalling the OS pretty simple and quick and have it not touch any data. So some people seem to do this fairly frequently (which is anything more than once to me). If that’s the case then a script like that could come in handy for sure.

Not at all actually. I used to reinstall Windows a lot more.

But I just don’t want to do everything by hand again if there ever comes a moment I have to reinstall. And now that I have it, I can just install EOS, run the script and about 30m laters I am done.

Most of the time spent is building AUR packages. It does feels nice having a good looking desktop after the script. Because the default Cinnamon DE is pretty ugly on EOS.

To get QT apps match your Kvantum theme I followed this turorial: 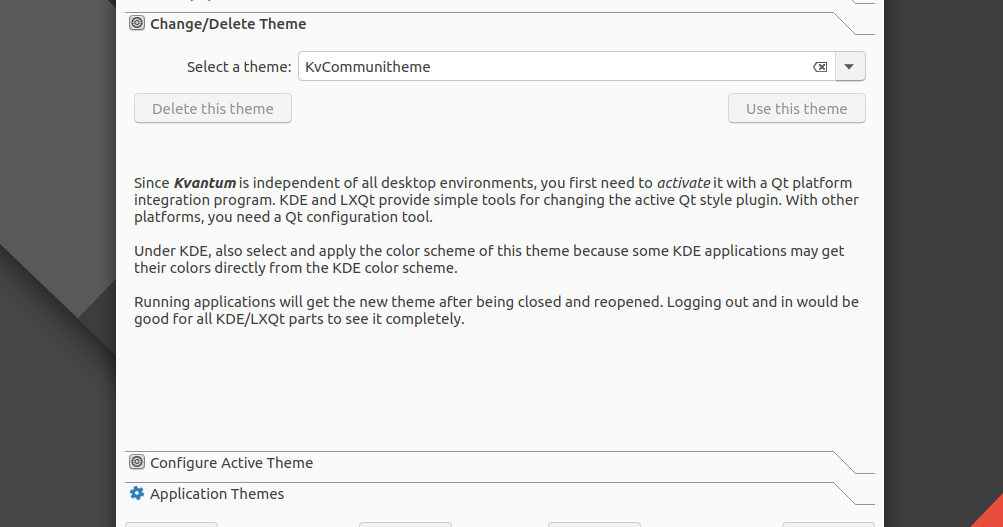 Use Custom Themes For Qt Applications (And Fix Qt5 Theme On GNOME) On Linux...

To be able to choose the theme Qt applications are using on your Linux system, tweak some settings, and have an overall better integration with Gnome / Gtk, you can give Kvantum a try. This is a SVG-based theme engine for both Qt4 and Qt5, KDE and...

I found that page as well with some googling. The echo is what was needed and I also needed the qt5ct program.

Ah I did it without the program, worked fine for me too. But nice that you fixed it