Hello all,
i have a weird problem since now. My screen is showing multiple graphic issues. I don’t use hybrid graphics. My system is down below. The glitches come and go as they want. But they are coming after a few seconds back.

Do you know something about that in relation to archlinux or endeavouros? Broken package or something like that?

I reckon that potentially could be a hardware issue: Several months ago my sister’s old laptop screen used to look like that everytime we moved the laptop. Turns out one of the RAM modules was loose and was causing the issue. The minute it got fitted properly the issue went away and Linux replaced Windows on the system

So, if I were you I’d also make sure your hardware is all wired up correctly, to rule out that causing the issue.

Edit: Also, I’d check out the system sooner rather than later, as you don’t want to cause further damage to your system, by having it run with ill fitting hardware - If that is indeed the case.

As in my case, that loose RAM module was causing the system to short circuit and trip out, hence the screen looking like yours. A system which keeps short circuiting is nicht gut in the long run. 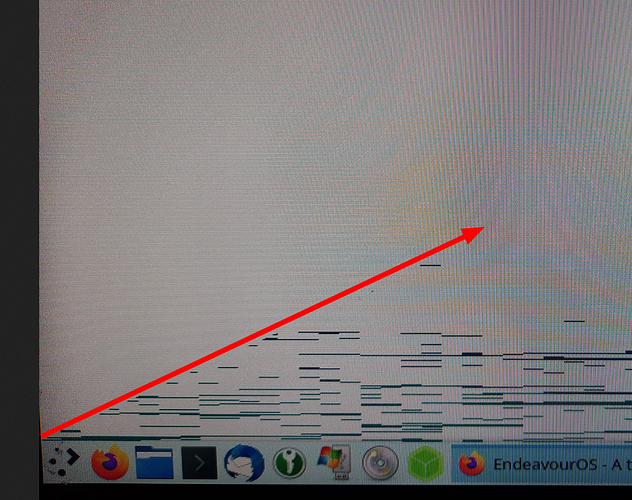 Is this after suspending / hibernate ? - Not yet tested. I booted my system and it starts right away when i reached my DE (KDE Plasma).

do you set up anything for the GPU?

What is the rendering engine setup for KDE?

Where can i find this information please?

I checked my hardware and i couldn’t find any loose hardware pieces. But what i found out is, that sometimes or everytime the graphic issues shown the screen behind the current shown window. For example the wallpaper of EndeavourOS, a browser window or text in a browser window.

Well if it isn’t a hardware issue. I’m guessing Joe’s suggestion about Intel being the issue could be correct. I’m sure he’ll be able to help you further in that case.

[Ctrl+X] to save file

I did this as you wrote, problem solved as it seems. But why this weird malfunctioning screen?

Nevertheless, thank you all of you for your help.

But why this weird malfunctioning screen?

But what i found out is, that sometimes or everytime the graphic issues shown the screen behind the current shown window. For example the wallpaper of EndeavourOS, a browser window or text in a browser window.