Rest easy, and thank you for fighting a good fight for freedom of prying eyes and security. Another great crusader gone. Thanks for all you’ve done. 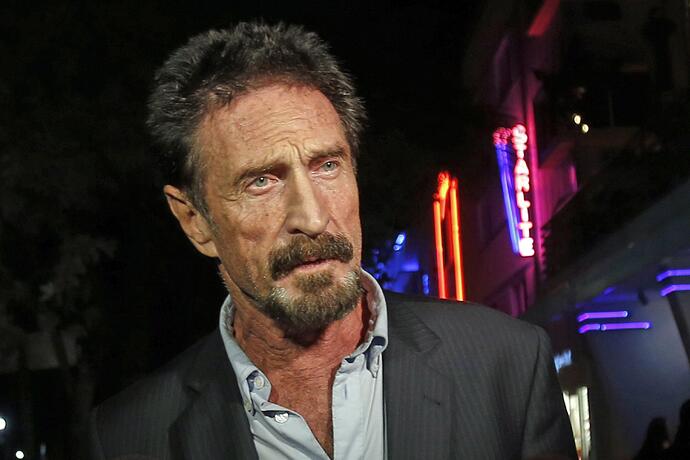 MADRID (AP) — John McAfee, the creator of McAfee antivirus software, was found dead in his jail cell near Barcelona in an apparent suicide Wednesday, hours after a Spanish court approved his extradition to the United States to face tax charges...

@officialmcafee
Getting subtle messages from U.S. officials saying, in effect: "We're coming for you McAfee! We're going to kill yourself". I got a tattoo today just in case. If I suicide myself, I didn't. I was whackd. Check my right arm. $WHACKD available only on https://t.co/HdSEYi9krq:)

Each day i wonder who will “doesn’t kill himself” next.

Yeah, I totally believe that suicide story. Sure, no doubt at all.

Rest in peace, Mr. McAfee. The world will be a duller place without you.

Yeah, I totally believe that suicide story. Sure, no doubt at all

I’m sure it just so happened in the only camera blind spot in the entire prison too.

The news is a great freedom fighter is gone. The rest is just a story. . .

Freedom fighter? All I know McAfee for is shitty antivirus software that’s nigh impossible to remove, and being caught with a minor in his house…

I read this the other day and was surprised and saddened. I remember John McAfee from the very early days of the Internet using Tribal Voice Powow chat program. One of the best programs i ever used. Wish it was still here today. He was a pioneer in the dawn of the Internet no matter what anyone thinks. Tribal Voice was and is better than any of these social media crap programs that exist today! You could have a conversation just like talking on the phone over a mic as it was full duplex all the while being able to type in a window also. RIP Mr. McAfee

I guess like all things no two people remember things the same.

Regardless of McAfee himself, a highly controversial figurehead, wasn’t his antivirus software basically spyware itself? It has been a very long time, but I remember it as being the WORST!

I am having WindowZ PTSD!

Everything is spyware when we are talking Windows. Always a Window open!

Regarding McAfee Antivirus, John McAfee has not been associated with this software since 1994.

So, if you want to make a fair judgement about John McAfee’s contribution to this (honestly, really crappy) antivirus, make sure to use the version from 1994 or earlier. If you do so you will notice that compared to other antivirus software of that time, like Norton, it was actually pretty decent.

I agree and it is still sold and used today. Comes on new pc’s still from some OEM builders. Honestly it’s not any worse than anything else available on Windows. There are some better products for sure. But John McAfee was quite the character and an Internet pioneer.

He didn’t die, he just forgot to resubscribe.