I have spent ages copying media files to my NAS but now want to back it all up to a new hard drive. Could someone please tell me what is the fastest way to do this? I can mount the NAS as an NTS folder but copying takes a long time. Even Rsync is taking a while.

Well…Speed depends on a lot of things:

It depends what kind of NAS you have but plain NFS is typically the fastest over a wired network.

If it is wireless, sometimes other methods are faster.

What speeds are you seeing, what kind of NAS do you have and how is everything connected?

Are you backing over a wired network or wireless and what speeds are you seeing now that you consider slow?

Wired (CAT 6 cable) and an average of around 60MB/s according to rsync. Apparently it will take approximately 249 hours to back up the 3.6TB of data.

To be clear is that 60 megabits per second or 60 megabytes per second?

I you doing rsync over ssh or using some other method?

Could someone please tell me what is the fastest way to do this?

Connect the external drive directly to the NAS and run the rsync from there.

Or, connect the external drive to your computer and run the rsync directly to the disk.

Transferring data via a network is the slowest way. 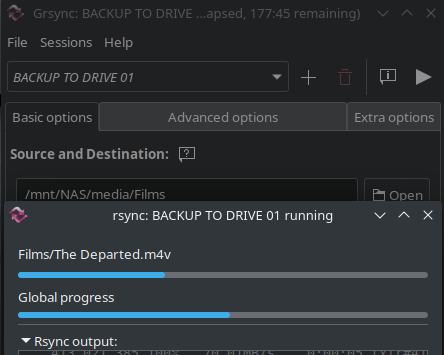 The NAS is connected to my router and the drive I want to back it up to is in an internal caddy/dock in my PC.

That looks like 60MB/s which is pretty fast. Are you sure the estimate isn’t wrong? Maybe you hit a bunch of small files which skewed the time remaining?

I think the estimate is wrong but it is still backing up now. Probably down to the network speed. Not to worry, I’ll keep on going.