So I was pretty stupid today in that I started the update to 5.8.3-arch(?) and a few other things, but after 45+ minutes the complete bar in Discover was at 100% but not actually complete (i.e. the bar vanishes altogether), so I figured it was being buggy and the UI got stuck since it was in the state for a while so I did a physical power cycle. Now booting into the partition or using the failback option gives a:

Press any key to continue…

Unfortunately pressing any key does nothing nor does Ctrl+C to try to exit out of whatever. Is there any way to recover to this or should I resign to reinstalling the partition from a flash drive?

Do you have the backup kernel as an option in grub to boot from? If so, do that and try reinstalling the kernel update.

Unfortunately no back up anything to my knowledge beyond what is on the SSD w/ the messed .img as my external HDD I use for easy weekly backups fell to the floor at the beginning of COVID and wasn’t able to find an open store at the time to try to recover and transfer to a new HDD. Fun situation altogether, but at least I have a semi-fresh copy my KeePass DB in the cloud I guess.

Is there any way to recover to this or should I resign to reinstalling the partition from a flash drive?

You could try to repair the update in terminal in a live session. Mount your root and do a arch-chroot:

where XY is your root partition. If you have additional partitions (e.g. separate boot or an efi partition) mount them accordingly before the arch-chroot:

Then check if the update was ok by

If this was ok then do a

Then cross fingers and reboot…

You are an absolute savior!

It was luks encrypted so I had to tweak things w/ what I found online, but overall it worked:

Found the linux and fallback image, but then output at the very end:

That probably isn’t a concern as I use nvme so I don’t think I should have anything on /dev/sda, but Grub removed the boot into Windows option which is on /dev/nvme1n1 (so can only select Endeavour image+failback on /dev/nvme0n1, which I’m mildly concerned about as I use Windows every two weeks or so, but nowhere near as much as the heavy daily usage of Endeavour!

I’m hoping the boot selection will refind/self-repair the missing Windows option as part of some upgrade soon given how much upgrades happen on Arch.

but Grub removed the boot into Windows option

You could try running

from EOS. If it finds your Windows then:

Actually you could run only the second command since it will call os-prober.

Thanks, that did the trick, perhaps it was because it was originally ran on a live stick that it couldn’t find it. Any who, you all are truly amazing! Your right off the bat correct and quick responses saved me a great deal of hair loss today.

Found the linux and fallback image, but then output at the very end:

This message is related to the USB stick you used with the live system. It can be ignored.

Thanks, that did the trick, perhaps it was because it was originally ran on a live stick that it couldn’t find it.

Hello everyone. Following this thread and others on the forum related to this topic, I found that it was most appropriate to post my problem here. 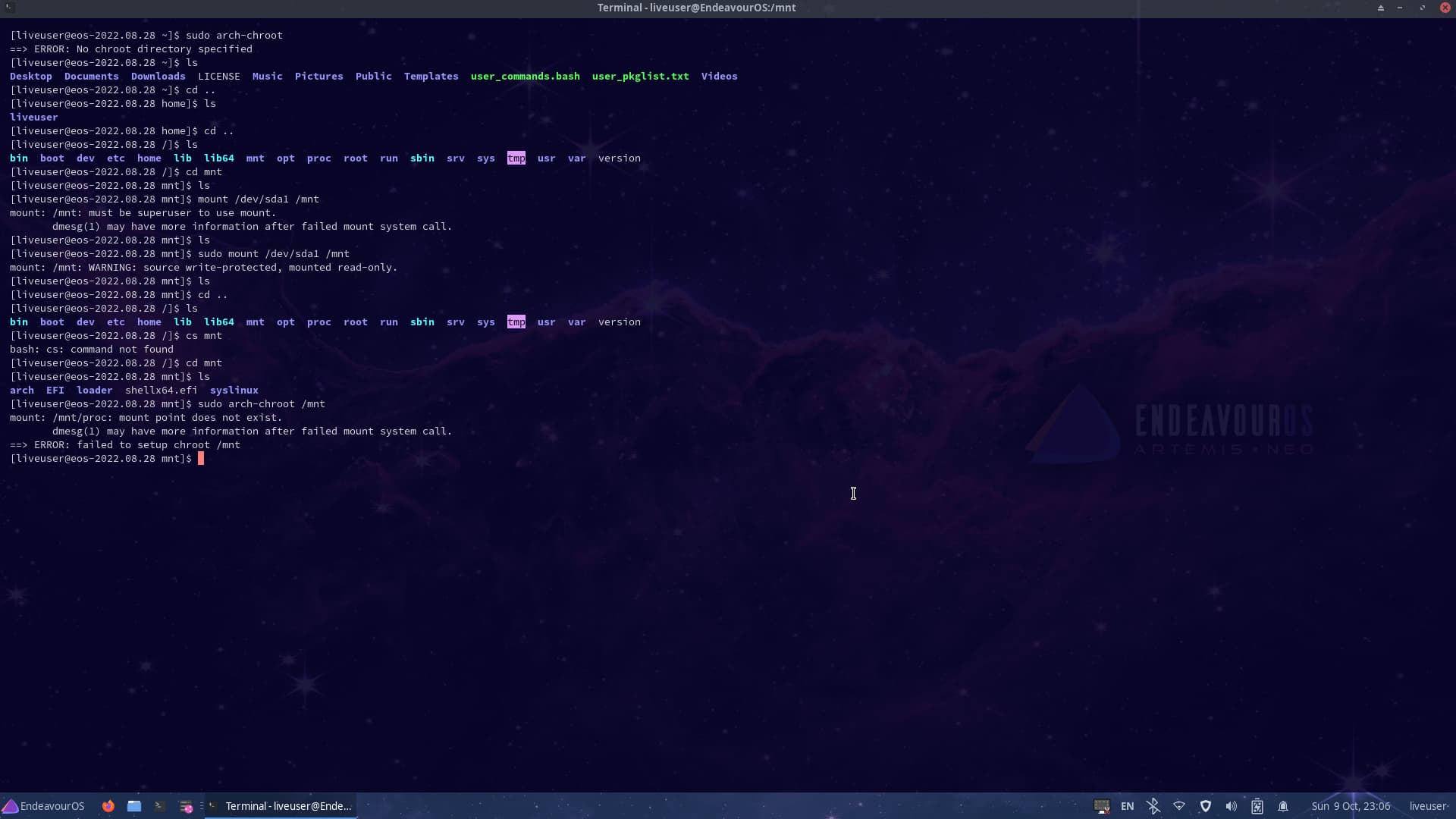 Similar to the author of the thread. after the last update, only the following information appears:
Loading Linux …
Loading initial …
error: file’ boot …’
Press any key …

unfortunately, the solution given by “csteinforth” from 1 Aug '20, does not work in my case. Other attempts to solve the problem via ArchWiki to chroot also failed

!!
Please create a new post with proper logs as per:
https://discovery.endeavouros.com/forum-log-tool-options/how-to-include-systemlogs-in-your-post/2021/03/

you can link to this thread if needed…