Now it has happened. The unthinkable:

EOS swapped places with Mint. Kinda sad innit? Linux Mint, respected and beloved Linux distro of the masses and a pillar of the community, was pushed aside by a loud and unruly punk, EndeavourOS. A… 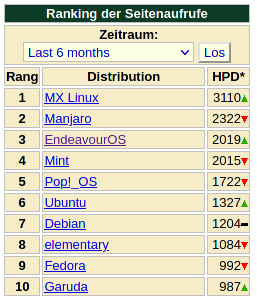 Of course it’s all bullshit, we all know that the DW chart ain’t a real indicator. So please spare me the commentaries. Let’s all just marvel and wonder about Endeavour flyin’ high!

Of course it’s all bullshit

Clearly, you are aware of it, yet you still persist…

@Orca It’s actually the first time I’ve visited your blog, it looks very nice and thank you for the compliment.

Clearly, you are aware of it, yet you still persist…

It’s not a Linux blog in the first place but started as a Second Life blog and is now just a grab bag. And I’m happy that many of my readers are actually on Linux.

Manjaro is the next to “fall.”

No the next fall might be MX Linux. If you look at the 3 month average, we are not that far behind the #1 spot as of lately. Seems to be a big influx of new users, or people downloading/click-on.

Manjaro is the next to “fall.”

Honestly, and please nobody be angry at me, I don’t think Endeavour deserves a rank above Mint and Manjaro. Endeavour might be good for us … but the ranking should reflect the spreadability and usefulness of a distro right outta the box. Mint and Manjaro (the Mint of the Archverse) are the best allrounders, easy to use, complete and don’t need much geekery in order to do stuff on them. They are good beginners’ systems but you can grow old on them as well. They deserve the #1 and #2 spots above all other distros.

…and yet 'that’s all

Doesn’t surprise me in the slightest.

Well, I agree that there should be—somewhere—a ranking that reflects these factors, but the DistroWatch HPD ranking is by definition something else entirely: it’s a ranking of total hits by unique IP addresses (counted once per 24-hour period) on each distro’s page on DistroWatch, which is a site probably visited as much by long-time Linux enthusiasts as by new users looking for an “outta the box” experience.

DistroWatch has attempted to address the needs of new users with this page (which is, admittedly, not very well promoted on the site):

It lists 10 Linux distributions… which are generally considered as most widely-used (directly or indirectly) by Linux users around the world. There are no figures to back it up and there are many other distributions that might suit your particular purpose better, but as a general rule, all of these are popular and have very active forums or mailing lists where you can ask questions if you get stuck.

Linux Mint is rightly at the top of this list, but it’s otherwise not very good advice for new users. I would have included EndeavourOS in this list. I think that your ranking of “outta the box” distros would be a better place for a new Linux user to start:

Now look at this shit: Yeah, I love EndeavourOS and I’m not too fond of Ubuntu-based distros buuut … just a bit over 100 HPDs are missing for EOS to pass the mighty Mint! :o That’…

please nobody be angry at me

I’ve been reading your blog for a few months now, and I find it endlessly entertaining. You are a wonderful writer (and I wish that you had completed your novel!

DW standing actually doesn’t reflect how many user are actually using the distro. It just shows how many page hits that particular distro page gets. Good example is no. 1 holder MX Linux’s HPD count. It was in a downward spiral which was not fast but was coming down because MX Linux was not making any news.

But as soon as they announced their new update MX Linux 21 Beta 1 HPD went up. So EnOS counter is up because people are talking about EnOS which makes people check out the page. Not saying it’s bad it’s good for our beloved distro.

Most of the Arch community are geeks who love to tinker their distro to match them. EnOS allows them to do that with out being too extreme by letting people use a GUI based installer which is some what of a draw back with Arch. Arch is a blank canvas, EnOS is a canvas with some help.

But when it comes it Manjaro yes I agree it’s a grate distro to start with but I think some people don’t seems to like it much due to the path their taking (from the thing I read). But not gonna say much because I’ve never used Manjaro.

Linux Mints down fall is mainly due to people moving to MX Linux because that distro kind of fallows a semi-rolling release schedule and it’s kind of rock solid too and they based the distor on Debian stable unlike Mint which is based on Ubuntu.

Also Mint kind of started to hide ability to change behind the scene stuff like Ubuntu (I think it’s trickle down from upstream). And it also lost the tag being the alternative to Ubuntu after MX Linux came on to the scene.

So same like that EnOS provided the people with another choice to Manjaro which is a fully featured distro. There are the Arch based distros like Arco but I think those are also trying to be clones of Manjaro which EnOS not trying to replicate.

I think this why every one (almost) is talking about EnOS and this is why EnOS managed to pass Linux Mint. Will the ranking be a permanent don’t know. But it’s good to see a new distro like EnOS making a splash with in the Linux community.

Thank you kindly, dear sir KWG. I’ve learned how to express myself in English quite ok-ish by now. So, you are the reader of my blog? I knew someone had to do it.

Strictly speaking from a n00b perspective, Endeavour has no place among the Top 10, but for general users it absolutely belongs in the Top 5. But since Mint and Manjo can and are used by advanced users as well, they belong above EOS.They are just more complete and usable and you don’t need to jump thru hoops just to get the Nvidia driver installed.

The DW new users page is Randomly All Over The Place! They really think CentOS, Gentoo, Slack and BSD make fine n00bie distros?

I’m a stupid housewife who knows just enough to find out what she wants and needs … and the last 4 mentioned distros are too geeky for me. And so is vanilla Arch.

But as soon as they announced their new update MX Linux 21 Beta 1 HPD went up.

But not gonna say much because I’ve never used Manjaro.

Manjo was my first real distro, after I wasted 2 unsuccessful weeks on Mint Xfce. I found a guruine by then who took me under her wings and forced me out of the *buntu stuff. Couple years later I broke up with Manjaro since they treated Mate like a 3rd class citizen and my updates were often broken. Namib and Archman followed, until I ended up on Endeavour. And now I’m back on Manjaro with my main machine.

unlike Mint which is based on Ubuntu.

Most Mint users with a hint of pride are on LMDE by now and hopiing Clem will one day leave the Ubu base and focus totally on Debian. But pff, not my concern anymore. I’m an Archie girl, there’s no way back.

you are the reader of my blog? I knew someone had to do it.

Well, I may be the only reader of your blog who knows nothing about Second Life! I read you blog for the clever writing. I chuckle (and know that you’re joking) whenever you refer to housewives.

Endeavour is much closer to real vanilla ArchLinux. Manjaro updates a bit slower and lags about 2 weeks behind Arch. So far the common wisdom everyone knows. My fellow Linux riders here in this blo…

Even for uneducated German housewives who don’t know what they’re doing most of the time.

I also read your blog for news about South Africa.

The DW new users page is Randomly All Over The Place!

Yes, I agree, and this DistroWatch page doesn’t seem to have been updated in ages. Your advice to new users, on your blog, is far better.

I chuckle (and know that you’re joking) whenever you refer to housewives.

Butbutbuuut that’s what I am. I retired early and am now a housewife and caretaker of my disabled hubby.

Your advice to new users, on your blog, is far better.

Well, I don’t care about the geeks and playkiddies who like to tinker and experiment with their distros and ultimately break them. I look at Linux distros the same way I treat and look at kitchen appliances: Shit’s gotta work! In so far are Mint and Manjaro the bestest!

I’ve been down nostalgia road for the last couple weeks with Linux Mint. It’s where I started my journey almost a decade ago, and if Arch went away tomorrow,i could very easily go back. It’s very complete and polished, and generally feel like Cinnamon is the most complete DE for the average user. It’s a fantastic distro.

Big congratulations to EOS! Before Manjaro and Antergos and then EOS, I used Linux Mint for a long time, but then I liked the freshness of the rolling release distributions compared to the traditional distributions.

And what other possibilities there are in it.