I have just installed EOS with Plasma KDE. Default language is set to English US. I added Greek and Hebrew through System Settings, with English US still set as default, then logged out. Seeing the language mixup upon logging back in, I restarted the computer.

Then, opening some modules (right term? newbie here), they’re displaying a mixup of languages. (Please see images below. Ooops, I can only post 1 image.) The other image I wanted to upload was of a Welcome screen with al-English text but wit a RTL layout,

What should be done to keep the default language display consistently–text and layout?

I had wanted my first post here to be gushing about EOS with Plasma KDE, being extremely impressed by it on first boot. Sorry that my first post is about a problem.

If you want to change default language systemwide you need to use localectl:

sudo localectl set-locale LANG=en_US.UTF-8
will set locale to given one.
where en_US.UTF-8 needs to be one available at:
cat /etc/locale.gen

you can also set more then one by editing
sudo nano /etc/locale.gen and uncomment the ones you want to generate.
Then generate them by running:
sudo locale-gen

Thank you, Der Doktor, for the lesson. And I thought there was a bug!

I learned, too, to distinguish between the system base and the DE. I realized that adding or removing languages in Plasma’s System Settings module only affected the DE (I now see why the module says “Configure Plasma Translations”). Applying your commands in fact did not change the languages mixup in the Plasma modules. They were righted only after the Plasma system configurations were reset to default.

Many thanks for teaching me what I really needed to learn to do what I really wanted to do–add languages to EOS, and not so much to KDE. This has been an insightful first forum lesson. Now enjoying EOS KDE and the EOS forum.

It still says it’s American English in the KDE settings menu, but it’s actually Spanish so I don’t care. On a related note, does anyone know which language my spell check is set to? I can’t change it, nor do I want to, I’m just curious 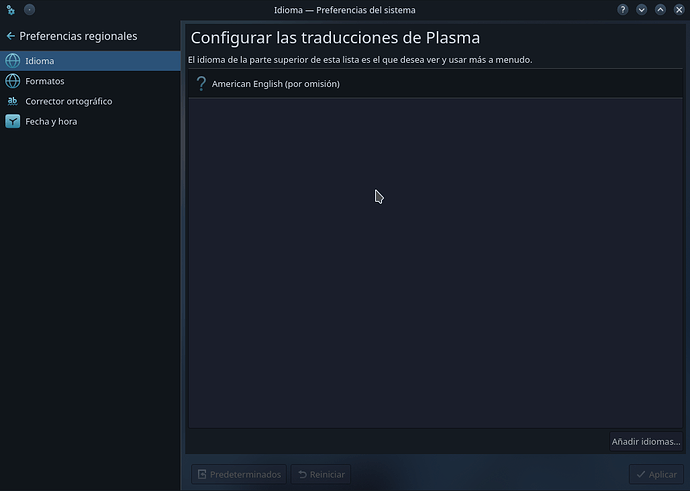 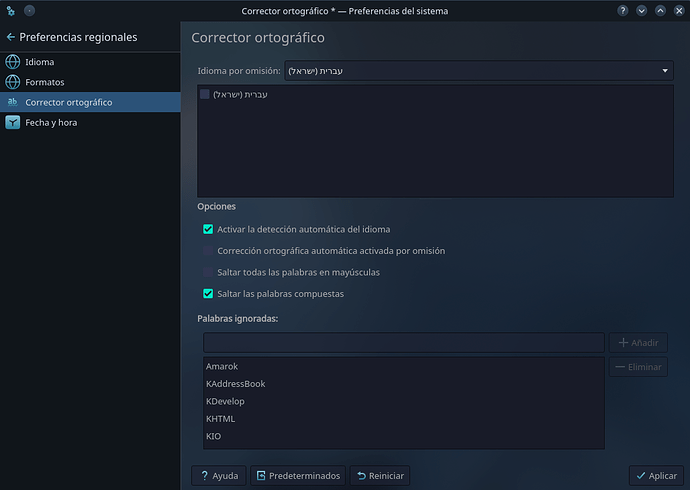 does anyone know which language my spell check is set to?

That’s Hebrew. I wonder why your default spell checker is Hebrew? You did not add Hebrew through Calamares or KDE’s System Settings, did you?

I’m wondering because the default spell checker in mine is also Hebrew and there are no buttons or clues as to how to change or add to it.

To use Sonnet you need to install spell checkers like e.g. GNU Aspell, Hspell or Hunspell and additionally the corresponding dictionaries for your language.

will show all available langs… install yours