Claws-mail; some update messed it up

Hi everyone! Hope you’re all having a nice life!

I use claws-mail, and some update has messed it up; the interface is barely usable now. It got recently updated to 4.0, I downgraded the pkg to previous version, 3.18, which worked OK before and didn’t have this issue, however, that didn’t change anything as the issue persists, so I think that some other update messed it up. 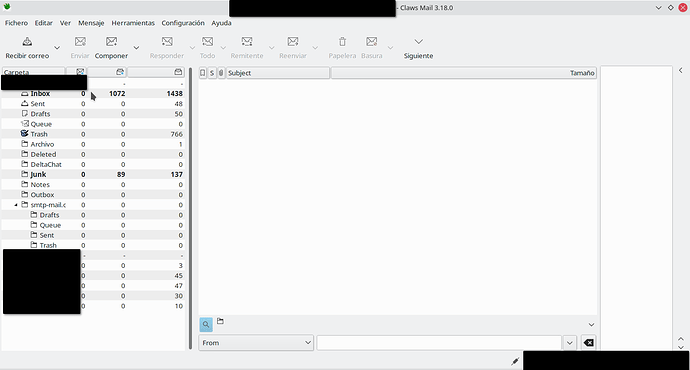 ksnip_20210722-0841221366×734 47.9 KB
If you’ve ever used claws-mail, you’ll see in the image above what I’m talking about. This is happening in KDE Plasma. Don’t know whether it is related, and if it works just fine in another DE. Any help is much appreciated. Thanks in advance for your answers.

EDIT: Hmmm … Ok, I think I might have solved it; I renamed clawsrc to clawsrc.old just to see if that did anything, and it did, now claws-mail interface is usable again.

EDIT2: The problem seems to be indeed with claws-mail 4.0, after renaming that file, upgraded to that from 3.18 again, and the issue did appear, I downgraded it once again, the issue is now gone, so guess I’m sticking to that one for now. Should I make a bug report in arch pkgs but tracking system?

It isn’t obvious to me from your screenshot what the issue is. Is it possible they just redid the UI in version 4? It looks like starting with version 4 they moved from gtk2 to gtk3.

Did you try deleting the clawsrc when you were running version 4?

It isn’t obvious to me from your screenshot what the issue is. Is it possible they just redid the UI in version 4? It looks like starting with version 4 they moved from gtk2 to gtk3.

Sorry about that. Not sure how to explain, but the message views were all messed up, I didn’t show more because, well, I don’t want people seeing my emails. Thought you might notice it. For example, if I click a message, I should see a sidebar with some options, like displaying HTML content by clicking in the “earth” icon, in v4 that bar isn’t visible. Yes, version 4 uses gtk3, I got a message after the upgrade when launched the app about having to reload plugins because of that, which I did.

Did you try deleting the clawsrc when you were running version 4?

No, didn’t try that. I only tried: