The good old Indian YouTuber Mutta on Linux from China.

P.S. SomeOrdinaryGamers is such a click-baiter

SomeOrdinaryGamers is such a click-baiter

Most of the time I don’t understand what his saying but I kind of enjoy what his doing.

SomeOrdinaryGamers is such a click-baiter

Yes, Chinese distros are for amateurs - that’s what i meant

I mean if you have ran Deepin (the distro) then you have been running Chinese Linux ™. After all it is developed partly as a replacement for the average computer user in China so they will be able to offer an OS that isn’t developed in the US to it’s citizens and civilian authorities.

Is this part of their plan to limit gaming to one hour a day?

Oh I am sure if you have a lot of Social Points you can “buy” more hours.

(Funny tho, isn’t it… so many western game companies catering to the Chinese market, and then they do something like this…

China hasn’t been communistic since the 70s. They CLAIM to be, but they’re not. Your point stands, tho. Unfortunately.

They CLAIM to be, but they’re not.

They identify as communist, so stop denying their lived experiences. Their experiences are more valid then your prejudices about what Platonic communism ought to be!

What is the correct pronoun for a communist?

China hasn’t been communistic since the 70s.

Although that is changing now too … billionaires are being scrubbed from Chinese history.

Xi Jing Un wants to corner that market too. 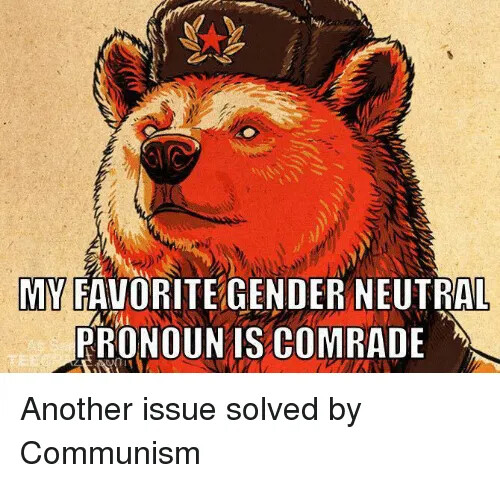 Again, strong self identification kicks in!

Let’s not go there, shall we.
#Transrightsarehumanrights