Can i switch from KDE to a "smaller" desktop - is this doable!?

can i switch from KDE to a “smaller” desktop - is this doable!?

note: i run EOS with KDE on a older Lenovo thinkpad - T520 with a Intel I5

from time to time the whole thing freezes - especially the Vivaldi-browser.

Question: can swith to another desktop environment - on the run - without any new and fresh installation_!?

i guess that there are some more “leightweight - things” out there.

look forward to hear from you
´

Yes, but you need to have one installed.

It is easy to make a mess out of it. Personally I’ve never bothered, but the general advice seems make a new user for the second DE. I’m sure others will help.

With window manager, it is much easier, and they are much snappier. They can also be configured to look amazing.

I suggest trying the community Openbox edition live usb. If you like it, you can install Openbox. It is a window manager. But you need to set it up before it is much usable. You can look into how they’ve done it in the community edition.

Oh waitaminute, there is no such thing as a community edition EndeavourOS openbox live usb! I forgot about that. You need to install it. Sorry.

Also, I’m not sure if you want to log out, and then log in in a different desktop, or if you just want to get rid of KDE and install a new one.

It is possible to install a different DE/WM after the fact but unless you have strong troubleshooting skills I don’t recommend it. It is cleaner to reinstall.

there is no such thing as a community edition EndeavourOS openbox 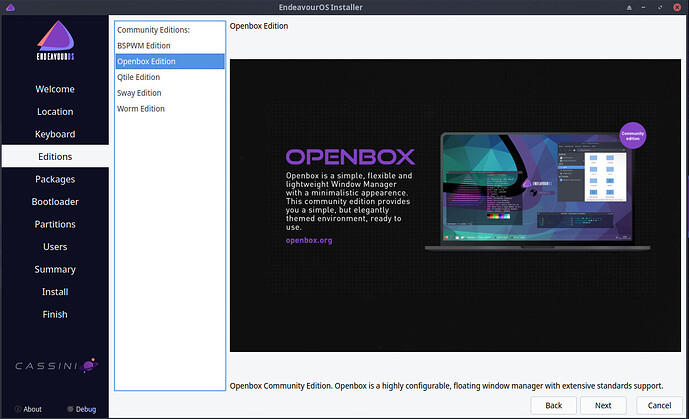 Can you boot into it from the live usb? I wasn’t aware of that.

Can you boot into it from the live usb?

You can install it from the live ISO.

You can only run xfce from the live ISO.

That was what I meant to say. It would have been a nice feature to be able to boot into it.

It would have been a nice feature to be able to boot into it.

It would be a great feature but the ISO would be like 10GB with all the DEs and WMs we can install.

I’ve seen other distros do it that way, it comes with complete configurations and all. Archraft does it.

If you install eos-packagelist you can install it that way. However, sometimes the editions conflict with each other because they share settings so I don’t usually recommend it unless you have sufficient skills to navigate the conflicts successfully.

Ah, I see. I was hoping the threadstarter could do it that way, avoid reinstalling and avoid learning openbox. Well, life is long and reinstalls are short.

Ah, I see. I was hoping the threadstarter could do it that way, avoid reinstalling and avoid learning openbox.

I just don’t recommend that unless you are prepared to troubleshoot any problems that arise from multiple DEs/WMs.

I used to do this all the time on my own machines. It can be fun if you don’t mind playing around and solving problems. If you just want your machine to function so you can get things done on it, I don’t recommend it.

from time to time the whole thing freezes

I believe you may not have enough RAM. I guess 8 GB would be the minimum that lets you work freely, open multiple tabs in browser, multiple apps… etc.

How much RAM do you have?
Perhaps post the results of
inxi -F
if you are not sure how much RAM you have, or read the last few lines of the output, it will tell you how much RAM.
A google search for “Lenovo thinkpad - T520” showed me it comes with only 4GB RAM. (as I expected).

I would say you need a more lightweight and minimal web browser much more than you need a lighter DE. With 4gb RAM and added swap or zram (not as fast) must things should be fine, except browsers can absolutely suck resources. 5gb on Firefox is nothing.

What lightweight browser would you recommend?

@otrott Does this T520 have SSD?
It seems has USB 2.0 ports only, so it’s a bottleneck in speed for external pendrive.
I would install a Mabox linux alongside to test&play with Openbox. It’s a ‘well accomplished’ openbox distro. You might borrow some elements from Mabox to the final EOS Openbox should it meet your expectations.
Here is a dubious opinion about Mabox
Edit: RAM usage [MB] in my Lenovo S-145 shown by neofetch

“Mabox Linux is amazingly fast…like faster than most distributions I’ve used. A big part of that is due to the OpenBox Window Manager, which is very lightweight. Compared to my regular GNOME-based Linux desktop, Mabox is like driving a Lamborgini instead of a Prius.”

@otrott
The question could be: “Am I willing to switch from KDE?”

Because if you’re used to visuals and other comfort out of Plasma, another D.E. might not be acceptable and a window manager even less. Take it from me, I could never get used to Openbox. Keystroke shortcuts in Openbox are almost a necessity, and things have to be configured in dot-files. I haven’t been able to figure out how to make settings stick for the touchpad when I start Bunsen Labs Beryllium, must put it into “.bashrc” and open the Terminal as soon as I can.

You should test around with GNOME, XFCE, Openbox and others to see if you really, really want to get away from KDE. I’m just saying. Those animations and fades and slides and weak stuff like that could become difficult to resist…

Another thing is that the freezing of Vivaldi could an issue with that web browser, not with the D.E. It sucks when spell-checking cannot be disabled in that program; this was months ago when I last tried it.

(“Reply” button seems to be broken for somebody else’s post, behaves like the purple button at the bottom.)

I don’t. I recommend more RAM and a newer computer. I like comfortable computing

I recommend surf, suckless, for internet. No bloat just webpage, it ought to use little resources.

The Lenovo T520 came with varying i5 processors that for the most are low powered dual core and with only 4 GB memory KDE is not the desktop to be installing on this. I would suggest xfce or lxqt or some other that uses less resources and it doesn’t have to do with just how much ram you have. The hardware is lacking.