Calamres bug when no swap selected

This isn’t an EndeavourOS bug, but seems specific to Calamares as I’ve now identified it with three different OSs. I’ve submitted the bug report to the Calamares team, but I thought it might be a good idea to post it here as well in case someone else comes across it…

When the ‘no swap’ selection is chosen in Calamares, the installer still creates the below entry in /etc/fstab for swap

I’ve observed this on three distributions now, using both manual and automatic partitioning.

This will create a 90 second hang during boot while its trying to process this line in /etc/fstab. Until the bug is fixed, removing the line from fstab as su will resolve the problem.

I have also read about this too but i thought it was just a fluke. I will test it myself and see if i can duplicate that as i usually always select swap out of habit even though it’s not really needed.

That bug has been reported on Calamares’ issues page on their github page here (was that you?):

Describe the bug Install done using 'No Swap' option results in entry for swap being placed in /etc/fstab as shown below: UUID= swap...

To fix the actual problem, use sudo blkid to get the UUID of the swap partition and paste that UUID into the fstab file. It solves the problem.
ricklinux October 7, 2019, 5:07pm #4

I just did an install with erase disc no swap on a newer ISO and didn’t see this issue. 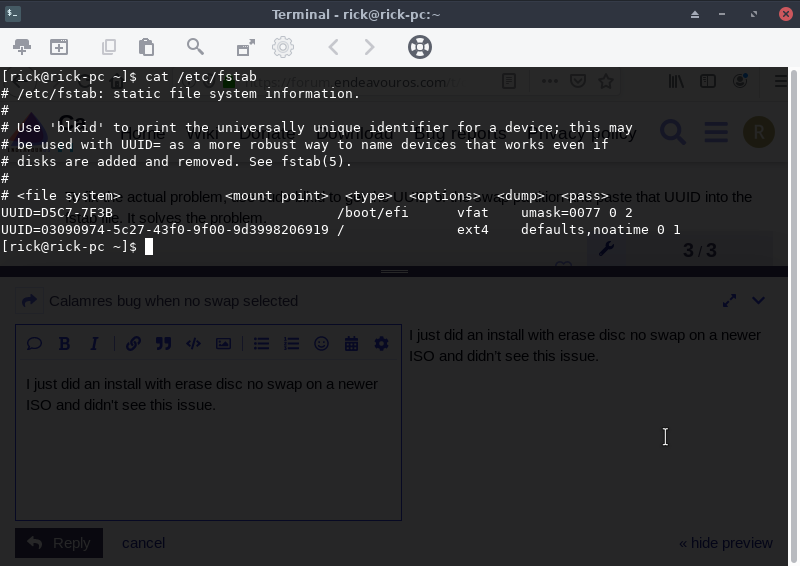