what am I doing wrong to restore?

A number of things

Basically, you just copy and paste one of those strings from your output. They are already formatted correctly.

I had date in there. silly me.

btrfs is used to control the filesystem and the files and directories stored. It is the tool to create or destroy a snapshot or a subvolume for the ...

last question - what is the “snapper boot enabled” in the menu of the BTRFS-Assistant app?

Appreciate all the help!

That enables the systemd service that takes snapshots on boot.

Thank you. That explains it.

@dalto Hi Dalto, I had a quick question.

I’ve chosen to retain 3 snapshots but I don’t think its working. Here is a list of snapshots and my settings.

How else can I limit the number of snapshots saved? 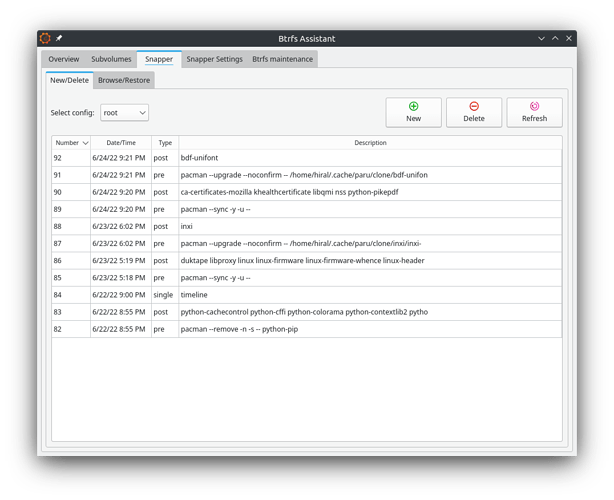 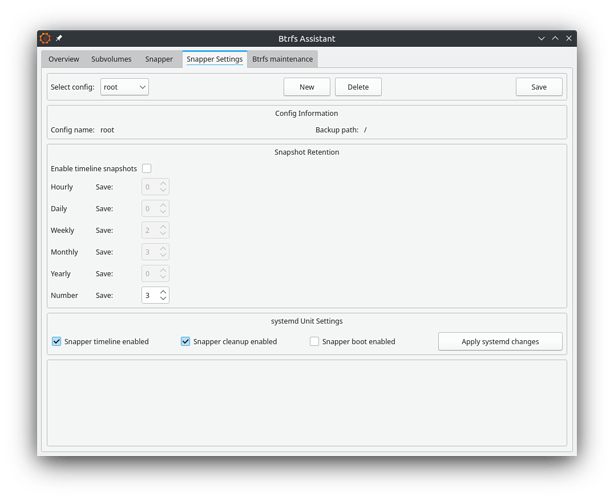 When did you set that to 3?

Just within the app when I installed it.

You can see 3 snapshots in the 2nd screenshot

Or is that setting just for timeline ?

It looks like the timer hasn’t run but is about to run any minute.

ahha it actually worked. don’t know what happened. but I see 5 in the list. I was expecting 3

One of them is a timeline snapshot from when you had those enabled. You will probably have to delete that one manually.

The other ones are probably too new. There is a minimum time in the config.

For one thing, recent snapshots take up almost no space so aggressively pruning them has very little value.

thanks for the explanation Dalto. makes sense. I will update to 6.

you are right about timeline snapshot. I had it enabled and now its disabled.