also the power menu says “not charging” is this OK? because in Ubuntu usually it says “Fully Charged” instead? I dont understand how the max charge suddenly changed now?

If the lowered max charge of 78% is normal then how to change max charge back to say >80% if I wanted a higher max charge?

(Gnome installation of EndeavourOS_Artemis_neo_22_8 on Ryzen 7 5700U MSI laptop)

Problem is not solved as I expected. After my battery charged to 85 it still reverted back to 79% after a few days so I still can’t change the threshold stop charging battery setting.

I use tlpui to do charging thresholds.

This is my stats tlp battery. am not familiar with tlp. Does this mean I have only BAT1 because I see in tlpui I have BAT0 and BAT1 settings?

setting necessary?
In wiki arch I saw this "/etc/tp-battery-mode.conf

And if tlp is not supported in my MSI laptop then is there a bash command to set or change max batter charge in endeavouros directly from terminal? tia 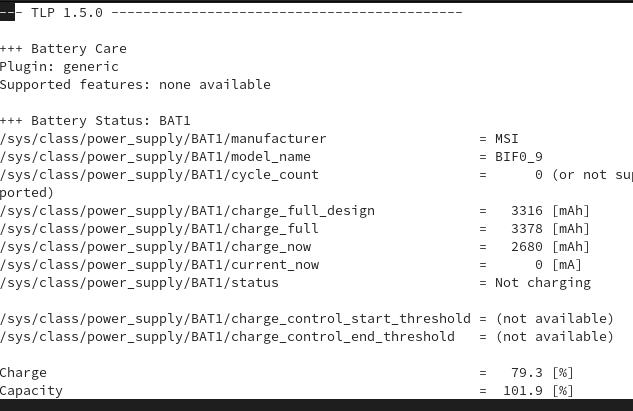 and if i run
sudo tlp fullcharge BAT1 ##same for BAT0
I get
Error: battery charge thresholds not available.

IS there any solution? I rebooted few times same thing reverts back to 79% max charge still cant change it.

Hard to say what the solution is without knowing much about your device.
If I were in your shoes I would

Could you also provide the exact model of your laptop

Yes, that’s what I would try. I think that way we could determine whether it’s a problem with your installation by eliminating it as a variable. You can also just boot into a live iso first without resetting the bios to see if that has any effect.

he “solved” it, only way was to boot into Windows and install the MSI Creator Center (the dedicated Windows App for this model)… set the battery option to stop charging at (desired)X% and start charging at say Y% then rebooted into Linux. ie…Only solution is to involve Windows…it was marked as “solution”

I read somewhere else that the battery levels could be hardcoded into the motherboard during Windows install process or via the MSI Creator Centre app? At the moment this seems to be the only solution, to set it via Windows, unless someone found another way to do it via linux.
(“Solved”)

3)Super-L key still not working and I am told by some KDE EOS users it is a bug. The Super-L key is by default the Fn key for EOS on MSI Modern 14. Just takes getting used to until it has been fixed by an update. (not solved)