I’m settling down with EndeavourOS and I want to make my installation as robust as possible. That means backups. But I never bothered doing backups before. So I’m going to explain what I plan to do and then you can tell my why my plan is terrible, and what the real best practices are.

I intend to use Timeshift to take snapshots of the system (excluding home folder) and just store them on the same 1TB SSD that my system is installed on. And I’m going to make a git repo of my entire home folder, clone it to an external SSD, and occasionally commit and push updates to that external drive as a backup of my files.

I could just use Clonezilla/Rescuezilla to make a backup of everything to the external SSD. The only issue with this is I don’t know if you can just update the backup (like with a snapshot or a git repo), or if you need to totally copy the entire drive every time.

OK now tell me why these ideas are terrible and what I should actually do. Also tell me if I should be using something like rsync or rsnapshot instead of timeshift.

My advice, for what is worth:

Regarding point 2, I have 4 categories of importance:

Category 4: not important data. It is stuff that would be inconvenient to lose, but not a big deal. Usually stuff like downloaded media: films, tv shows, music that is easy to find. Getting it back would involve downloading it again, that’s it. It’s unlikely that it will ever be unavailable. I don’t back that up. Instead, I have it on dozens of external drives.

Category 3: stuff that is very difficult to replace. Usually rarer media, films, books, music that is difficult to find. I have that backed up on external drives, in at least two copies. I could probably replace it, but it would be a lot of work.

Category 2: stuff that is irreplaceable, and would be quite bad to lose. Original stuff I’ve made, various projects, etc… I have this backed up using Borg backup, in multiple copies on external drives. This is also the stuff that changes a lot, as I work on it, so I like to have several versions backed up, and here data corruption is quite possible, so an incremental backup solution like Borg is important (because I don’t want to backup a corrupted file and destroy the good version).

Category 1: priceless stuff. Like photos of my deceased family members and pets, memories of time long past… Also old finished projects that I am especially proud of. Stuff I couldn’t possibly bare to lose and which doesn’t change at all. In addition to having multiple copies of it on external drives, I also burn it on DVDs and distribute it to multiple family members and friends. Some get encrypted versions of it, the trustworthy ones get a non-encrypted version. But it exists in multiple copies on multiple locations.

This sounds reasonable. What do you use for those backups? Is git a legit backup method, so I don’t have to awkwardly drag & drop new versions of all my files?

Personally I don’t use Timeshift, but I do use rsync for my personal data.

I think you are using KDE (?) in which case you can use kup as a GUI frontend for rsync. You can set it so that every time you attach your external SSD, an icon will appear in the system tray and you can copy the folders/files you have specified. 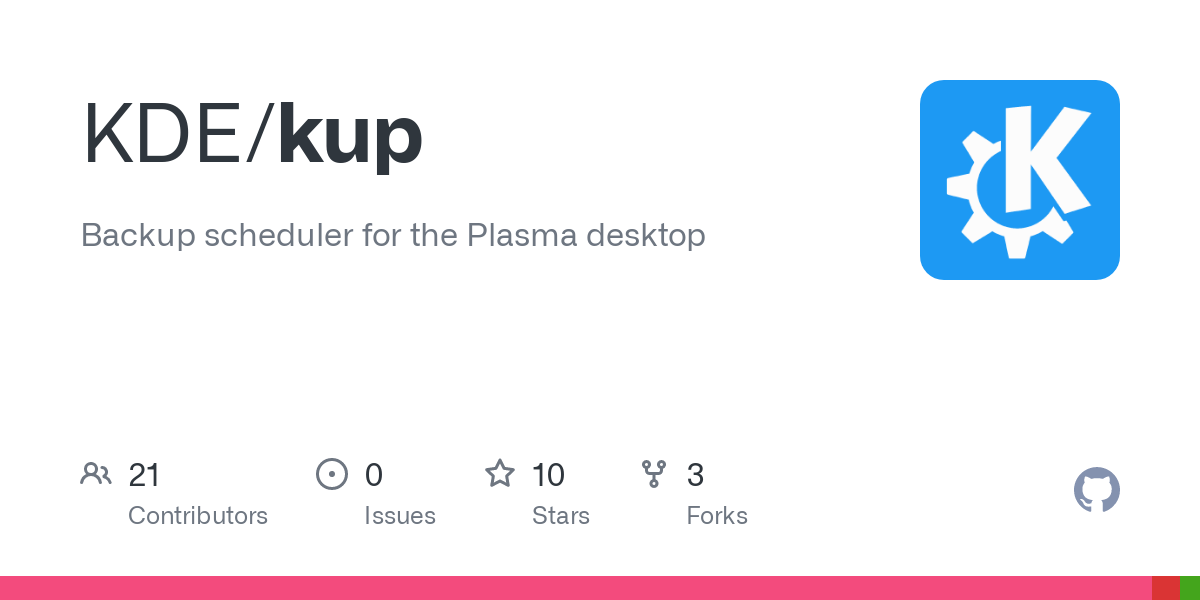 Backup scheduler for the Plasma desktop. Contribute to KDE/kup development by creating an account on GitHub. 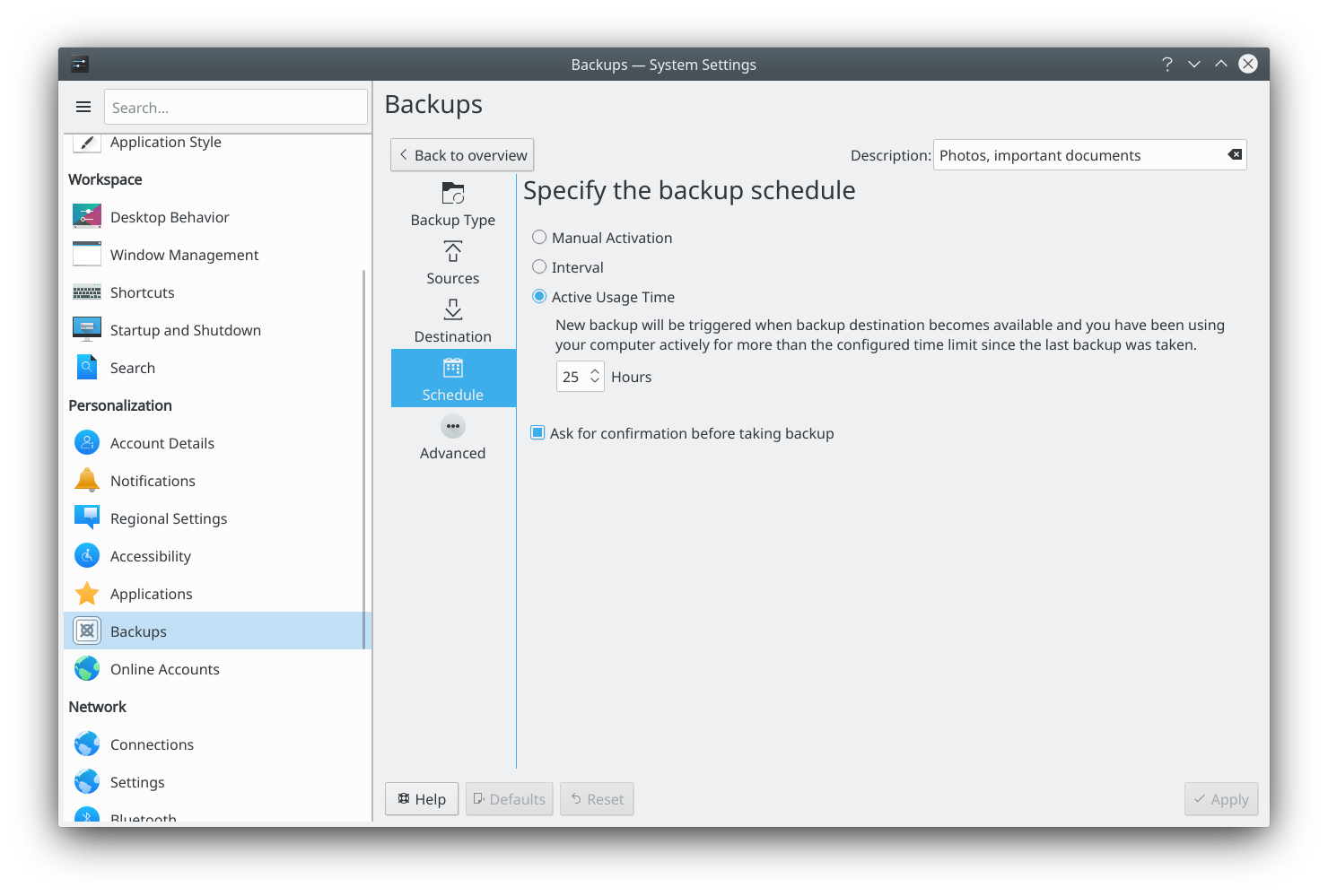 Is git a legit backup method,

No, git is a version control system, not a backup solution.

There are basically two solutions I use:

I never use any “cloud”-based backup. The “cloud” is just an Orwellian term for “somebody else’s computer”.

Apart from making backups of my personal data on external drives, the only thing that I backup from the system is the dot files and folders under home and also /etc.

If the system is beyond reparation spending “reasonable” time and effort, I could reinstall and restore the data and configs.

I use Grsync or copy-paste.

Grsync is what I use if I’m ever running a non-KDE system.

This is what I am always running

Joking aside, rsync with or without frontend is a nice tool.

This is what I am always running

I always try not to judge you for that

I went with Gnome because it was just faster and snappier than Plasma. So now I’m seeing some comments below from @pebcak saying that Grsync is a good GUI for a “non-KDE system.”

But @Kresimir is suggesting that Borg is better because it also tracks changes (which is basically what I was looking for in the git solution which they discouraged). Does G/rsync not track changes? Is there a meaningful difference between Borg and G/rsync?

rsync is just a fancy tool for copying files. Nothing else. It’s really excellent at what it does, but it’s not a backup solution.

Borg is a tool specifically designed for backup. There is also Vorta, which is a GUI frontend for Borg, making it somewhat simpler to use.

Does G/rsync not track changes?

You can set rsync to only copy those files/folders that have changed and delete those that have been deleted. Any unchanged files remain in your backup.

Never tried Borg, but the

I use rslsync to sync important data in my latop. Thus I will get three backup(phone, pc, laptop). Nice to know G/rsync and brog

Apart from making backups of my personal data on external drives, the only thing that I backup from the system is the dot files and folders under home and also /etc.

I would also include a pacman -Q list in the backup so that one knows exactly what to install after having re-installed an EndeavourOS.

I use restic to backup my home folder to a remote server running their rest server. Set it up and forget it