Wobbly windows and Magic lamp are two ‘desktop effects’ that were popularized by compiz (and beryl). They were later added to kwin. If you want to see what they’re about, there’s lots of youtube vids about compiz effects… (or try them on a current KDE if you want)

Ah, it’s all those animations I wondered how to get rid of

I don’t particularly appreciate the system doing fancy effects and sounds, they get annoying very quickly, but maybe I’ll get used to them

Having windows open in the center of the screen is just another feature or they can be stacked or a bunch of other options. They are under system settings workspace.

I will check that out, still haven’t explored all the settings.

I like Yakuake by the way, it makes using terminal more convenient and fast in a DE, thank you for mentioning it @ricklinux

I like the magic lamp and wobbly Windows because i think it makes it faster. Maybe it’s just a visual thing? But when you slide something out of the way or minimize it or close it. It’s fast!

I think it is

I doubt that animations can make anything faster, probably only the contrary

The ability control almost everything about a window via rules is pretty cool.

I found the Window Rules in the settings. Looks a bit overwhelming now, but it can probably make the system very flexible. Seems like I won’t get bored with Plasma very soon

I haven’t touched the windows rule stuff. But yes Plasma is very customzable and there are some new things coming. Read about some more fixes today.

I like Yakuake by the way, it makes using terminal more convenient and fast in a DE, thank you for mentioning it 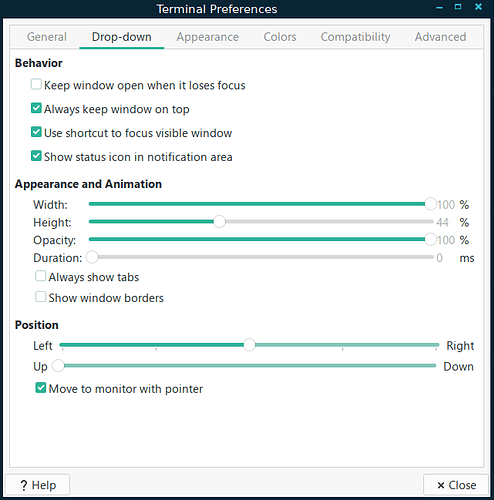 It’s something so deeply entrenched in my workflow, I feel like missing a finger when using a system without it. I even have set the CTRL+` shortcut to it just like in quake

Maybe it’s not really relevant to you when using plasma, but a great think to know about when trying out or switching to XFCE or other GTK based DEs.

I never appreciated drop down terminals, because they are kind of pointless in a tiling wm (which I was using most of the time). But in a DE it’s just perfect, where an alternative would be to have a floating terminal window instead (I think KWin can do tiling, but unsure).

That’s nice to know, I never paid enough attention to that. I like xfce4-terminal too and using it on another OS

Definitely will check that out.

edit: Hmm, I don’t have the Drop-down tab for some reason. Do I need to install something extra or activate it somewhere? 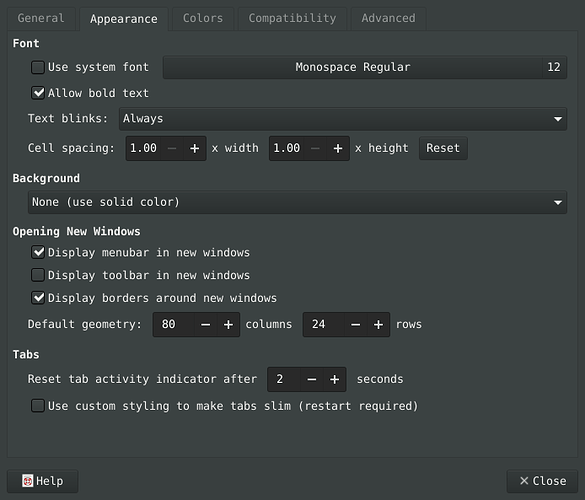 edit2: I’ve read the man. It needs to be launched with the –drop-down option, duh

Yes, simply bind that to a keyboard shortcut.

I tried this in keyboard settings? How do you get Ctrl+ mine shows Crtl+= and also how do you make it launch? Do you have to browse to the bin file? Never changed many settings and not familiar with Xfce inner workings.

How do you get Ctrl+

It might be hard to see depending on your screen resolution but it looks to me like it is set to:

Yes… but how do you set Ctrl+ because i tried it and if i press shift to get the + sign instead of = it gives me shift + and also the shortcut doesn’t launch as i’m unfamiliar with the setup? Missing something?

Edit: I see other keyboard shortcuts also so i want to try some but need to know how?

how do you set Ctrl+ because i tried it and if i press shift to get the + sign instead of = it gives me shift + and also the shortcut doesn’t launch as i’m unfamiliar with the setup? Missing something?

To me it also looks like @nate has it set to Ctrl+`. You don’t need to browse to the bin, just type in your command and it should work…

Hmm? I tried it but it didn’t work? Is there something else I’m not doing? I will try again?

Edit: It shows this 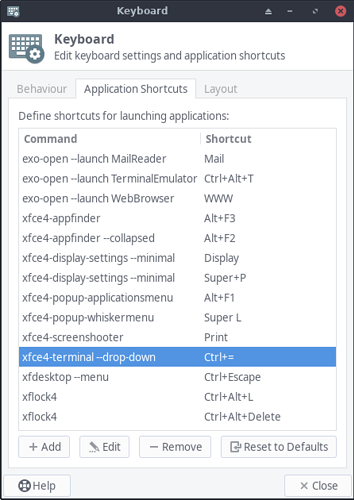 But it does work!

I just tried it (with the key) and it works fine - although it's BIG! enter the command, then when prompted use the key combo you want - ie: a CTRL and a in my case. - the plus just means more than 1 key involved… in your screenshot - the = key is the one modified

Then it will be assigned to hitting CTRL - might be overkill