Perhaps this question has an obvious answer but one for which I haven’t seen.

It doesn’t appear we can just sudo pacman -Syu to Apollo. So how does one upgrade to Apollo from an earlier release?

If your system is updated you are already to Apollo. EndeavourOS is a rolling distro.
In rolling release distros there’s no differentiation between “apt-get upgrade” and “apt-get dist-upgrade” (from deb-based distros).

After updating today my current system version is 2021.12.17. Does that sound correct for Apollo?

I think it’s the ISO version number you installed the system with at the time.

In rolling distros there are “starting points” for new users or for clean start after format. That’s your starting “version”.
Check this. From here:

EOS-quickstart – A new GUI app created by Dalto, who joined our core development team in January, that helps you choose and install the most common and helpful apps on a new installed system.

Run eos-quickstart in your terminal. Do you see the new gui app? 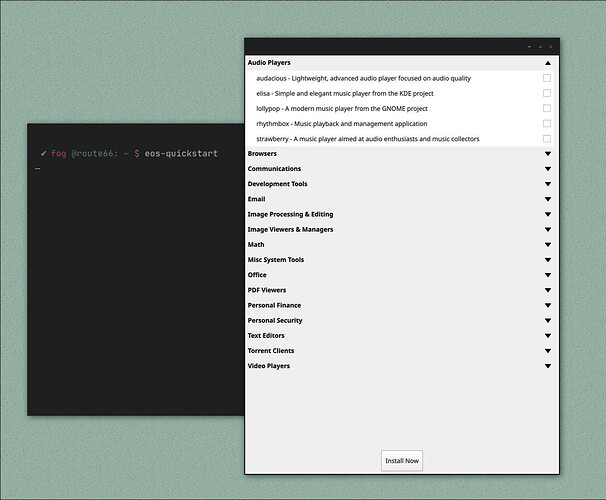 But then how can I check if Apollo is installed? It doesn’t appear to be. For example the new Apollo wallpaper is not in the background folder. There is no indicator about the new wm on login.

eos-quickstart is a terminal unknown command.

Hm… I started with the same iso version (atlantis) and now i have this app, new icons, wallpapers, lightdm background etc.
I’m using the openbox edition, so i don’t know what packages are installed or not in other DEs.
Maybe you should wait for someone with more knowledge about eos. You don’t need “dist-upgrade” but maybe something missing.

OK fog. Thanks for giving it a shot. I’ll pick this up tomorrow.

Scotty_Trees I"ve got eos-quickstart installed now. It appears to be an application installer.

That’s exactly what it is. I think they took the idea from Mx Linux. They have a similar app.

As far as ditro version is concerned, the command needed is:

However, the EOS team needs to add the “LSB Version” and “Codename” to their package, so it still won’t tell you which version it is ATM.

That is confirmed what I’m seeing.

Hopefully, they just add it in a future update and add it to the “Welcome” app for convenience.

Understood ddnn, but none of the changes described by others - icons changing, new wallpaper. etc, happened after the update.

Yeah, that’s again because of what others have said: it’s a rolling release. The changes you get are based on what you haven’t already customized.

So, it doesn’t reset your settings for each big update. Rolling releases are mostly seamless by design.

Also, I think somewhere in this post it says that some features will only be seen by persons using the new ISO.

Also, I think somewhere in this post it says that some features will only be seen by persons using the new ISO.

Scratch that. It doesn’t actually say that. It only reinforces that EOS is a rolling release. and that existing users don’t need to reinstall.

Apollo is just a new iso, not a new version of EndeavourOS. With a rolling release there is no new version. Every time you update you are receiving the latest packages. I now have an Apollo splashscreen at boot but my iso comes from September 2020. All the packages are up to date every time I update the system. As far as wallpaper backgrounds go I don’t know about those getting updated because I use my own images from my Pictures folder, not the ones in /usr/share.

For the wallpaper you have only to download the new one from the welcome app. Grub should have been changed the background by itselft because the eos-grub-theme package has been updated.
All the other stuff you have to customize it yourself or reinstall from ISO (but the latter just defeat the purpose of a rolling release).
You have all up to date, same as if Apollo ISO wasn’t release. Just enjoy and ask if you have any question

upgrade to Apollo from an earlier release?

Hello @Mach281 and welcome aboard.

Actally I docked at EOS during the Atlantis ISO and had the same thoughts, since everyone says its a “rolling release” but it doesn’t update the ISO name.
Glad you asked it.