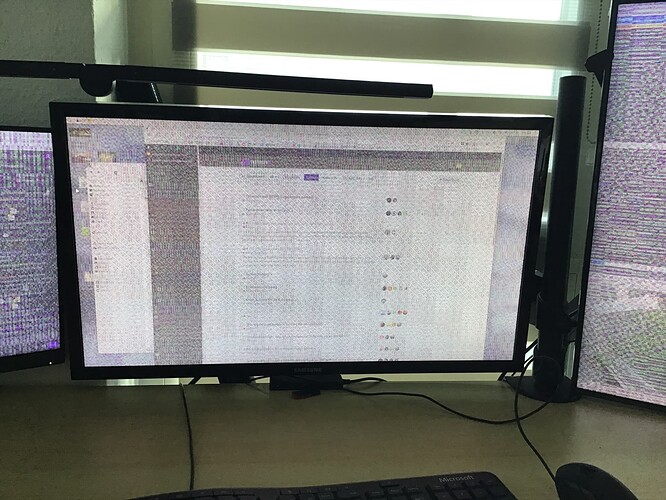 I see multiple crashes per day since updating to 5.13. But it also occurs on 5.10 LTS now. Kwin-Wayland. More specs and logs here, which I believe(?) is the appropriate bug report, so I voiced in there.

First of all I’m just curious to hear if it’s a “just me”-issue or other experience a similar behavior.

I’ve also been noticing these graphics anomalies with my RX590 amdgpu not even playing games. I have seen it flash this screen quickly just booting up. I’m not getting any crash because I’m not gaming but I’m sure it would be the same as you are seeing. This has been noticeable in the last few kernels and updates. Mesa? amdgpu? Kernel?

I agree it’s amdgpu but they are all part of it.

Edit: Have you noticed it too?

I’ve also been noticing these graphics anomalies with my RX590 amdgpu not even playing games. I have seen it flash this screen quickly just booting up.

Thanks for the feedback!

I’m pretty sure it’s closely related to playing hardware accelerated video via va-api (as the bug report mentions and the crash reports indicate so far). I’m able to play games for hours without any issue. If that screen would only flash for a second I would assume some kind of internal “mode” change. So it might be a different issue.

Yes you are probably correct as it flashes quickly although sometime a quick “hang” i would call it. Just flashes and then seems to roll over correctly to the screen it’s displaying.

I have seen a few but mostly on xfce / anything using lightdm. Plasma seems to be fine.

Well i can’t say for sure which desktop i noticed it on but I’m pretty sure since i use kde mostly that I’ve seen it rear it’s ugly head here too.

@Schlaefer
I just wanted to ask one thing about your graphics. Do you have both xf86-video-amdgpu and xf86-video-ati installed? I was just wondering because the ati is not needed. I remember another user had issues and i noticed he had both amdgpu and ati listed in the graphics output from inxi -Ga. When the xf86-video-ati was removed the problem went away.

Yes I have. Thanks for the idea, I’ll give uninstalling xf86-video-ati a try.