I’m planning an AMD-based desktop build. I have a target to stay below ~$1,000(USD) or not too far over that? I’ve done some poking and shopping and have come up with the following as a potential combination of Motherboard, CPU, GPU and memory (I have quality nVMe and SSD drives and more than capable case and power supply already): 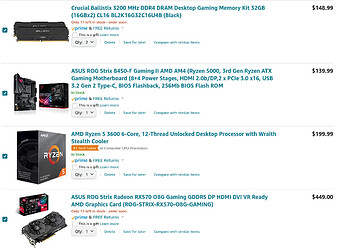 Anybody see red flags with any of these choice? Better trade=offs for performance vs cost? I’m not a big gamer, but do like to be able to play some FPS or WoW type stuff at times. Mostly I’ll be editing and/or streaming video, writing and compiling code or just web surfing.

Thanks in advance for constructive criticism or suggestions!

I have a similar system…
same cpu, but on a B550 motherboard, 2x 16gb of DDR4 at 3200Mhz
Went with an RX 5600 XT OC edition though…
while it only has 6gb of vram it is a newer/faster card…
(I don’t have much headroom left on 1080P ultra on most games, might want to pick something faster to be future-proof)

edit: checked amazon… while I paid around 400 euros for my RX 5600 XT back in the day, it seems they have gone up in price A LOT!

Hardware prices are through the roof at the moment esp. for GPUs. USD(?) 450 for a RX 570 is rather expensive and imho not worth it. Maybe there’s a cheaper solution available to carry you over the next few months. Still fine for middle of the road 1080p gaming, but not a great investment.

I do have an ancient nvidia card I can use for a while … agree that GPU prices are crazy right now … hmmmm?

what about a second hand gpu?

The price on the motherboard is good. Here is $179.99 cdn. Video card is overpriced but hard to get right now and some sellers are gouging! Personally if i had a decent Nvidia i would use it until supply is better and price. The ram also is a bit on the expensive side if it’s 148.99 x 2 But again if that’s the brand and specs you want? There are so many different vendors of ram and the specs vary so go with what you want. Corsair is a good brand. All of these are decent parts and you are trying to stick to a budget. Are you using your old power supply?

I did look around some and had trouble finding cheaper ram without dropping clock speed or going with off brand generic ram.

Personally I think that is way too much money for that specific gpu. You can find them used on ebay for like 100-200, and a used 580 for even less than that new 570. Yeah you’re taking a bit of a risk, but as long as you stay to someone who’s reviewed pretty positively, it should be fine. That’s what I did, got a used 580 for 200$, great price and performance, and great compatibility with linux.

the price on that 570 is like 2x what i paid for mine. Just crazy overpriced. Don’t buy that.

Don’t know the RAM well enough to say - but the speed is right! Processor is fine - but how much less than 3700x? They are both ‘less than cutting edge’, so should be cost-effective. I paid less (fairly recently) for an RX-580 - I can’t see that pricing making sense. MB? I’ve seen B550 not much (if any) more than that B450 - do you need the gaming features of that model - or just the chipset? B550 has a better future (and gen 4 nvme when you want it).

It’s a broken market right now, and nobody should accept these prices.

It’s a broken market right now, and nobody should accept these prices.

True dat! … I don’t have an urgent need to do this build right away, so I think I’m going to end up reviving some old hardware to muck with until the price/value ratios get back to something more rational!

I looked on amazon and couldnt hardly find a 570. Found some 5500’s for less than your posted price. My philosophy is that spending more than 200$ on a graphics cards needs some serious debate as to what i’m really getting. Find one used on ebay if that’s a real price and spend the difference on a better cpu. I very much want a 3900xt something or other. 12 cores, 24 threads. It’s currently the best my 1st gen mother board can take since i updated the bios.

it’s winter warm up the flat!

I think he assumes that summer WILL come again…

When ambient temps are 110+ (F, obviously, not C, we’re not all bursting into flames), fans only help so much.