A wild Windows user has challenged us. Quick, what are your responces? 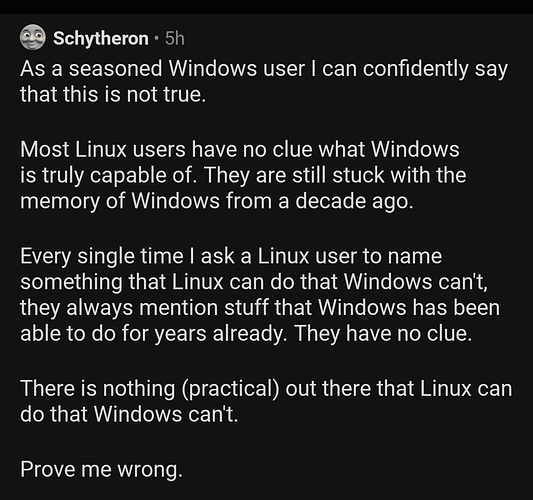 Does windows allow me to change my Desktop Environment? Or switch to a barebones Window manager? Or at the very least allow me some good amount of customization on whatever default DE they force down the user’s throat?

I spend a significant amount of time experimenting with different WMs, customizing them, and seeing which one fits my use case and shaping them exactly the way I want.

Updates that aren’t forced and don’t require you to reboot with a risk of bricking the system.

does linux collect data and keep personal infos , that microsoft DO NOT

Well, it’s true that all of the everyday normie computing stuff you can do on Linux, you can also do on Windoze, albeit more slowly, with less privacy, and more viruses. So in that sense, our buddy Schytheron is right: everything Linux can do Windoze can also do. You even have WSL on Windoze…

However, what our pal Schytheron would not even think to consider is one very significant, and to Linux users very obvious difference: with Linux you own your computer, with Windoze, you don’t.

For example, can you choose not to update on Windoze?

So it’s not that Windoze can’t do everything Linux can, the problem is that it does more than that. It does more than you as a user would want it to do, and you get no say in the matter. And neither does Schytheron, but I guess he doesn’t mind being bossed around by his computer which is hostile to him and loyal only to Microsoft.

Anyone who uses Linux and has for any length of time knows this is just a waste of time. I don’t need to make any comparison because i know that Linux is better in every way and i have no need to prove it to anyone. I am just content to use it and not have to deal with the Microsoft nonsense! I close all my Windoze and when i want fresh air i open the Terminal!

I know a thing Linux can’t do and Windows can!
Execute .exe virus files.

I’m pretty sure it can, though damage would be very limited I imagine, considering Wine is pretty sandboxed. Anyone can correct me if I’m entirely wrong, my knowledge is a tad limited. Our Sommelier @keybreak could maybe expand a bit more, given it’s an interesting topic, at least to me.

Indeed it can…but in order to harm your Linux host, you’d need to be extraordinarily stupid and:

Back on track, if we’re being serious and objective about something practical, i can give few things coming to mind:

However i can name few things that Windows / MacOS do better, and what’s most insane to me - those are very basic things which can be fixed, but they don’t:

P.S. Oh and you can hack the living sh*t out of any Windows version with Kali Linux in a matter of seconds

Can Windows do that to up to date Linux system?
Yes it is possible, but waaaaay harder and time consuming.

Oh and having filesystem without fragmentation!

As someone who just switched over to linux from windows about a year ago, I resent the claim that this guy seems to be trying to make that all linux users are hardcore veterans that have been using linux for over a decade and have no experience with modern windows. Linux has a thriving userbase, that is constantly seeing new blood. Maybe not at the rate that Microsoft or Apple see new users, but that’s just fine. As for the question, for me it really boils down to two things…reliability, and freedom.

With Linux, I don’t have to worry about a random update getting pushed through in the dead of night without my consent, wich randomly reboots my system and then suddenly breaks half of my programs (yeah that really happened). I am able to look at the contents of an update, do proper research, and find out exactly what something does before deciding for myself whether or not to push the update through.

And with Linux, I atleast OWN my own computer and the software it contains. There isn’t some arbitratry TOS saying what I can and cannot do with my operating system, and I am not being fed ads everytime I reboot my computer reminding me to enable microsoft edge as my default browser, or nudging me to turn cortana back on so it can go back to harvesting my data. That crap started getting reeaally annoying. My system just reboots and there it is…ready to do what I want.

I once took out time to read the TOS of Windows 8, and I was freaked to the core! It felt like by installing W1nd0ws, I was voluntarily giving my PC to Micro$oft.

I took the time to read the EULA on Win XP - and that is when I accelerated the departure (kept my winME going for while, as it was the only one to that time that would stay up for longer than a day or two).

The whole premise that people use Linux “because it does things Windows doesn’t do” is fairly pointless.

You could make that same argument with virtually any OS. They all do the same things but that doesn’t change the fact that we all have our preferences.

To be fair, that appears to be a comment taken out of context.

I do not intend to defend either side, I use both!

OS’s are like religions. Arguing about which is superior is akin to starting crusades in the OS-secular comment sections.

Linux has many customization which windoze lacks. Change DE and its like you have a new computer. Linux also allows you to revive old hardware that wont run on windoze.