Is there way to have 2nd Time in tray when mouse over or something.
I am so use to windows when my mouse hover over, it shows local time and another timezone. for example, local time and USA time with mouse over, without having to install applet or something which potentially burden the system even more.

This is my current tray time. 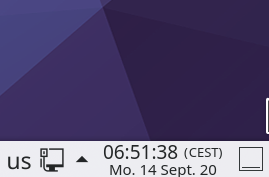 How much have you actually tried to work this out yourself?

Seems your first inclination is to create a forum thread asking others to teach you before doing your own research and trying to learn or solve something yourself. This is not a good habit to get into, and will eventually lead to your threads being ignored due to perceived help vampirism. Bit like this one has been.

The Arch Wiki should become your best friend, all of what is needed to run Arch in there. Creating a thread when really stuck is okay, but it should be a last resort … not the first thing you do.

If you simply right clicked on clock, configure digital clock settings, time zones … you would see the ability to select multiple time zones and a checkbox to select mouse wheeling through them.

Two minutes of exploring should have been enough to find this if you had actually tried.

This has already happened.

If you’re making 80% of new threads then you should probably wonder whether you’re doing something differently to other people, and why that is.

Help Vampires are found in every public online community, from those nearest to our hearts to those furthest from our principles.

Instead of consuming of ill-gotten hemoglobin, these vampires suck the very life and energy out of people. By nature they feed on generous individuals who tend towards helping others, and leave their victims exhausted, bitter and dispirited.

I didn’t want to say anything, not wanting to start any drama, but since both @otherbarry and @jonathon already voiced their opinions (with which I wholeheartedly agree, BTW), I think it is safe to voice my opinion:

this forum is, I think we (as a community), encourage help vampirism. I think we are a bit too afraid to be perceived as elitist, which in reality, couldn’t be further from the truth. I also think a small dosage of RTFM never hurt anyone.

As much as I love this forum, I find the whole Stepford Wives atmosphere here slightly off-putting, and I think there is a real risk of driving away the veterans who want to help newbies, but are annoyed by feeling that they have to walk on eggshells.

this forum is, I think we (as a community), encourage help vampirism. I think we are a bit too afraid to be perceived as elitist, which in reality, couldn’t be further from the truth. I also think a small dosage of RTFM never hurt anyone.

Come on, don’t be such a frog

It’s fine in general, there is just some…limits this forum can take

Nobody need elitism, everyone needs sanity

I think maybe we need to find some common ground because i don’t think we want to drive those away who may need more help than some are willing to want to give or feel they need to. Maybe it’s just better to educate those users how to use the forum and get the help they need in a nice FRIENDLY way? Multiple posts about everything under the sun is quite annoying I know! Dealing with one issue at a time is easier although some issues cross multiple boundaries. Maybe we can work on this. I know a lot of you veterans have way more experience than i do so i do understand. But lets not be too hard. Remember we all started somewhere! It’s also a very tough time right now with what is going on around the globe so lets all take a deep breath and relax. It gets better… in time! This forum is still young.

Maybe we can work on this. I know a lot of you veterans have way more experience than i do so i do understand. But lets not be too hard.

How dare you son?!
I’ve won medals on Linux World War II on Manjaro side!

We just need to keep it civilized, regardless of what’s going on

Come on guys this is a new user, probably pooing bricks that they might break their system as that is what they have read,
You know the one Linux is to hard for joey public it has the power to blow your comp to bits and burn your house down.

Also everybody started somewhere asked questions some that sounded stupid to others but what the heck we all asked them,

Now @andrew_ysk is asking those questions so instead of helping we as forum members are calling him a help vampire,

a new user, probably pooing bricks that they might break their system as that is what they have read

OK, so if that’s what they’re afraid of then take backups and break things.

Anyone who thinks that “I just want to use my PC because I’m afraid I’ll break it” would be acting rather contrarian with an action of “I’ll risk repartitioning and formatting my disk and installing Linux as a completely new and different OS”.

While I have some sympathy for not knowing what you’re doing and wanting to get help, asking a constant stream series of questions (without showing you’ve done any sort of work yourself) is not going to endear you to the people who are wanting to help you.

Imagine a child asking their parent where their toy is, every time, for every toy. The parent might very well love their child, but there will always come a point when the answer is “did you actually look for it?”

It’s not all just about the “helpers” being nice. It’s about those “helpees” being nice too.

Come on the user is new I see worse questions asked at a higher so called skill level like which theme should i use, what music player should i use, what terminal, this is from users that claim they have used Linux for years, Everybody flocks to help them.

You know me for a long time 15 years + I never have asked for help well once in the last 10 years, but that is me, I believe in doing my own research but you and I and some others are not average Joe, we have to show patience and cut them some slack.

But a new user with many insignificant questions in a short time can end up making their own Distro and be at No 2 in distrowatch in a few years or Making a Arch version of the No2 distro in a couple of 3 years,

Were these called help vampires I think they were very close to being called that at times.

My 9 year old drives me mad at time asking this and that he takes it all in and shows adults how to do things correctly.
This is how we normal humans learn by asking what we do not know and learning from it.

New users need help not calling names.
If users feel they are as you say HELP VAMPIRES simply do not answer their posts I only answered this one because users took the course of humiliation including yourself

First of all, I want to say that what I am about to say represents only my own personal opinions and shouldn’t be viewed as anything more.

this forum is, I think we (as a community), encourage help vampirism.

Yes, to some extent I agree with this. We encourage people to ask questions which can certainly have the potential to lead to someone having no filter and asking endless questions. However, in practice, I haven’t seen it to be a recurring problematic issue in the time I have been here.

I think we are a bit too afraid to be perceived as elitist, which in reality, couldn’t be further from the truth. I also think a small dosage of RTFM never hurt anyone.

If you believe this, you are missing the point. It isn’t that we are trying to be the opposite of elitist. We simply want to be friendly and welcoming to everyone as much as possible. The idea that people should be helped first and questioned second is one core component to delivering on that philosophy.

I think there is a real risk of driving away the veterans who want to help newbies, but are annoyed by feeling that they have to walk on eggshells.

Again, I agree with this. On the other hand, we can’t be everything to all people. If someone would prefer to be in a place where new users are encouraged to grow through independent development instead of hand-holding, this may be the wrong spot for them.

Of course, I think there is a compromise here that would hopefully accommodate as many people as possible. That is that nobody here is required to help anyone else. If someone doesn’t want to provide support to someone for any reason, they don’t have to. The key is, instead of jumping into those topics in a snarky or sarcastic way, they should simply ignore them and participate in the topics they do want to be part of.

That may mean that after enough questions an individual stops getting help from a significant portion of the forum members but I think that is OK too. Personally, I would rather see a question go unanswered than see the requestor attacked for asking a question.

All that being said, there has to be a limit and almost any philosophy is problematic if taken to extreme lengths. In this case, we have someone in less that two weeks who has created 39 help topics some of which contain multiple questions. Objectively, that seems pretty extreme.

The problem for me is that it is hard to tell the difference between a person who isn’t making an effort to help themselves and a person who needs a little extra help to get started. In the end, 13 days on the forum and probably less than that actually running EndeavourOS is still very new.

New users expecting others to teach them without making an ounce of effort to learn themselves is not fine. Forum community should be “finger spotting” for new users, not doing the actual heavy lifting. Encourage learning don’t spoon feed.

If a query is covered in the Arch Wiki just point them in that direction, in the typical EndeavourOS friendly manner. Or in this case if something is obvious with 5 minutes of exploring.

On the odd occasion help vampires are actually trolls too … asking a slew of silly questions for the LULZ./ Not relevant in this case, but something to always be aware of.

I want to see those medals now on a

Really ? I explored the whole time thing and calender… i didn’t however explored timezone… Never thought of that… it was easy in windows

you simply right clicked on clock, configure digital clock settings, time zones … you would see the ability to select multiple time zones and a checkbox to select mouse wheeling through them.